There’s thousands of play dough recipes online. Like literally thousands. Some with scent, some with vibrant color, some edible, and some with glitter. Regardless of how it is made, it’s a staple in our house.

We have some available at all times, which means we make a new bath every couple of weeks, at least. We typically make a simple recipe but sometimes we like to mix it up. This particular day was a mix up day. We needed to think outside of our typical play dough box. We experimented a few different ways to make this Super Silky Shaving Cream Dough and finally found the way we like to make it. It’s been our go-to every since!

This Super Silky Shaving Cream Homemade Playdough is so silky smooth. It molds like typical play dough but it will also crumble. Its actually pretty wondrous how it works the way it does. My daughter created structures or played with molds but then would take her plastic knife and cut, chop & dice it into a million pieces. 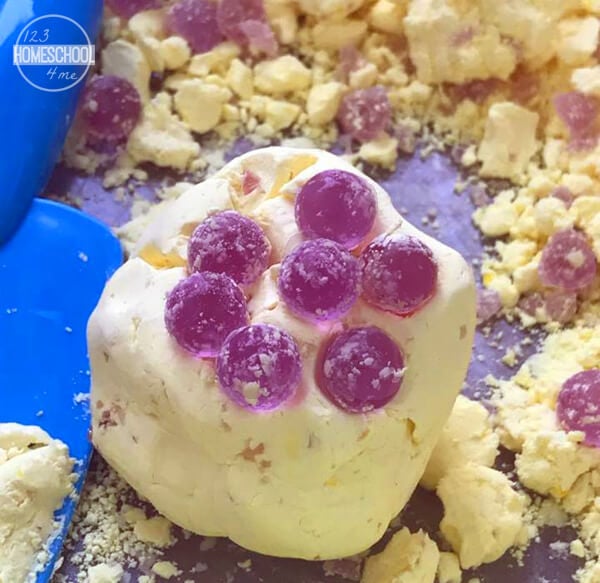 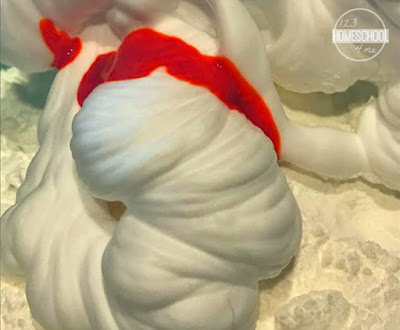 I dumped about 2 cups of corn starch into the bottom of a mixing bowl.

Next we squeezed about 3/4 of a can of shaving cream on top of the corn starch. We used the super cheap style of shaving cream. You know, the kind from the dollar store that is super foamy ( Not The Gel Kind ).

Then I started mixing it. I made the mistake of trying to just whip through it with a whisk. Bad idea. Go slow. I still used the whisk, I just stirred slow.

When it starts getting more combined I switched to a spoon and my hands because it was getting thicker.

It wasn’t as pliable as I had hoped, so I added a couple drops of water. This is optional, I just wanted it a little more squishy. And the water worked perfect. Just a tiny bit though, literally a few drops.

Then I added the plump water beads 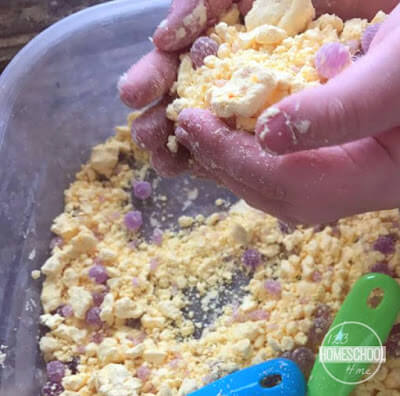 This shaving cream dough plays very similarly to typical or store bought play dough. You can mold, squish and create with it. Then it crumbles. It reminds me of gak (water and corn starch mixed together) but in a play dough form versus slime.

This dough would be perfect to use play dough tools like these DIY Play Dough Tools for exploring textures.

The water beads added an extra fun, squishy texture that turned out to be a super fun dimension. My daughter liked using her play dough tools to try and get the water beads separated from the dough.

This activity is perfect for independent play or a group sensory bin. However it is used, though, be ready for an afternoon of giggles and smiles!