Sharing your favorite books with your kids is one of the best parts about reading together. There are lots of classic children’s books that have entertained families for many years, and they have become beloved family favorites. This list is full of children’s books that are destined to remain on family bookshelves for years to come. 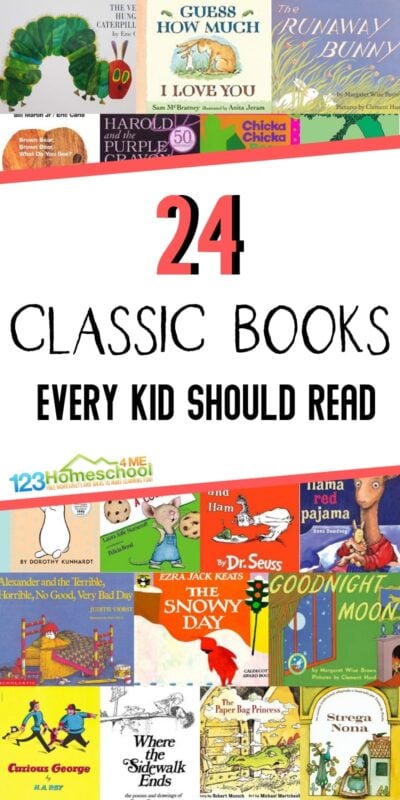 24 Classic Books Every Child Should Read

was written and illustrated by Eric Carle. Follow a small caterpillar as he ventures out to find some delicious foods to satisfy his big appetite. The colorful illustrations are made even more interesting by cutouts and the different sized pages. This is a great introduction to counting, as well as different foods, and the life cycle of butterflies.

was written by Bill Martin Jr. and illustrated by Eric Carle. This exploration of animals and colors uses a fun repeating rhyming pattern. Each page introduces a new colorful animal and uses the same refrain to ask it what it sees. The brightly colored collage illustrations pair well with the story.

Guess How Much I Love You

was written by Sam McBratney and illustrated by Anita Jeram. This sweet book introduces little ones to the idea that love cannot be measured. Little Nutbrown Hare and Big Nutbrown Hare compare their love for one another, making bigger and bigger claims. The accompanying illustrations are done in soft and gentle tones, showcasing the adorable pair and the love they have for one another.

was written by Bill Martin Jr. and John Archambault and illustrated by Lois Ehlert. This brightly colored alphabet adventure follows the lower case letters as they race to the top of the coconut tree. Kids will love the peppy rhythm of the text, as well as the vibrant illustrations and the silly letter characters. Check out these activities to pair with this popular book!

was written by Margaret Wise Brown and illustrated by Clement Hurd. This sweet story follows a young bunny who tells his mother that he will run away from her. No matter what scenarios he dreams up, his mother reminds him that she will always find him and be there for him. The illustrations alternate between simple pen sketches and colorful two page spreads. Kids will love finding the little bunny wherever he is hiding.

was written by Robert Munsch and illustrated by Sheila McGraw. This heart tugging story showcases the never ending love between parent and child, and illustrates the changes that occur in our relationships as we age. The mother in the story rocks her child and shares her love in a sweet refrain as he grows from baby to man, only to have her sweet words repeated to her when she is older.

was written by Dorothy Kunhardt. This interactive book has been a hit with many generations of kids. The simple text introduces easy action words and encourages kids to touch, pat and otherwise interact with the illustrations on the page. The different textures and engaging elements make this a great one to get little ones interested in books.

Where the Wild Things Are

was written and illustrated by Maurice Sendak. This adventure story follows a young boy named Max who is sent to his room for causing mischief. He imagines himself venturing to a distant land full of wild things, and becoming one of them. This creative story of imagination and mischief is accompanied by detailed and entertaining illustrations of the wild creatures.

was written and illustrated by Shel Silverstein. In this tale of giving, a tree happily offers shade, leaves and apples to a young boy who plays beneath her. As he grows up, she offers more and more, eventually giving everything that she has. Even when she has nothing left to give, she offers him the only thing that she has left. This story about the gift of giving is accompanied by simple black and white illustrations that manage to bring the tree to life.

was written and illustrated by Don Freeman. Corduroy is a sweet stuffed bear who wants nothing more than to find a friend to take him home. When a little girl’s mother points out that he is missing a button, Corduroy goes on a mission to find one. The illustrations accompanying the story are adorable, showing the determination of the bear and the sweet friendship between the characters.

was written by Laura Numeroff and illustrated by Felicia Bond. This story imagines a funny series of events that can occur when you give a cookie to a mouse. The text is easy to read, and the illustrations are adorable, showcasing the funny antics of the little mouse and the consequences that come from each decision made by the main character.

The Little Engine That Could (Original Classic Edition)

was written by Watty Piper and illustrated by George and Doris Hauman. After a train filled with toys breaks down, it is up to a little blue train to complete the mission and save the day. This classic tale of determination and overcoming the odds shares an important message while entertaining young readers.

was written and illustrated by Dr. Seuss. In this funny rhyming story about trying new things, the main character is hounded by Sam-I-Am to try his green eggs and ham. The peppy rhymes and silly scenarios are sure to entertain young readers, while parents can appreciate the message about trying things that you believe you won’t like.

Alexander and the Terrible, Horrible, No Good, Very Bad Day

was written by Judith Viorst and illustrated by Ray Cruz. This tribute to bad days reminds us that we all have days when everything goes wrong. As the main character struggles through one mishap after another, he decides that it would just be easier to move to Australia. The rhythm of the text makes this a great book for reading aloud, while the illustrations showcase poor Alexander’s struggles and frustrations with his terrible day.

was written and illustrated by Anna Dewdney. This story of bedtime woes follows Little Llama as he struggles to sleep after his mother has left the room. The rhyming text and colorful illustrations show the little llama becoming increasingly worried and frustrated when his mother doesn’t immediately respond to his cries. The sweet but firm message that Mama Llama gives to him in the end is a great reminder for all reluctant sleepers. Looking for more bedtime books that kids will love? Check these out!

was written and illustrated by Mo Willems. This funny interactive story introduces readers to a determined little pigeon who just wants to drive the bus. He asks, bribes, and shouts at the reader in an attempt to convince him or her to let him get behind the wheel. The simple illustrations mostly feature the funny pigeon speaking directly to the reader through speech bubbles. Kids will love responding to the text and being part of the story. Click here for more interactive books that kids will love!

was written and illustrated by Ezra Jack Keats. This tribute to the wonder of a snowy day provides a glimpse into the magic that children see when snow falls outside. As Peter ventures out into the snow, he travels around the city and explores the changes that snow brings to his world. The accompanying illustrations are full of bright colors and textures.

was written and illustrated by Margaret Wise Brown and illustrated by Clement Hurd. This classic bedtime tale follows a little bunny as he bids goodnight to all of the items in his room. The simple illustrations and the soothing rhyming text have lulled generations of children to sleep.

Where the Sidewalk Ends: Poems and Drawings

was written and illustrated by Shel Silverstein. This collection of silly and whimsical poems are a great way to introduce kids to poetry. The poems range from insightful to outright ridiculous, featuring silly characters that kids can enjoy, and various rhyme patterns that they will love to repeat.

was written and illustrated by Tomie dePaola. Strega Nona is a witch who provides magic and cures for the people in her village. When she goes out of town, she asks Big Anthony to watch over her house. However, his curiosity gets the best of him and he gets into trouble while using her magic pasta pot. The illustrations are done in dePaola’s signature cartoon style, and the story carries an important message about the consequences of our actions.

was written by Robert Munsch and illustrated by Michael Martchenko. When a dragon attacks Princess Elizabeth’s castle, he burns up all of her clothes and kidnaps her prince. The determined princess goes on a mission to save the day, and uses her smarts to outwit the dragon. This tale of girl power reminds readers that sometimes brains are the best weapon.

was written and illustrated by Chris Van Allsburg. This adventurous tale follows a group of kids as they battle a dangerous board game come to life. The story is full of imagination, leaving the reader wondering if the events are actually happening, or all in the character’s heads. The illustrations are incredibly detailed and life like, featuring the incredible creatures that come out of the game.

Curious George was written and illustrated by H.A. Rey. Join the curious monkey as he is taken from the jungle by the man in the yellow hat and brought to a new home. His curiosity gets him into some trouble, and kids will love watching his silly antics. The illustrations are simple, but the adorableness of George shines through.

was written and illustrated by Crockett Johnson. Harold has a purple crayon, and he uses it to create all kinds of scenes and scenarios to explore. The simple illustrations of the young boy and his crayon show how he can create entire worlds with a single crayon and his imagination.

Vicki is a former teacher who blogs about reading, kid’s activities and children’s books at Babies to Bookworms. She is a stay at home mom to her two year old daughter – a budding bookworm as well! Vicki aims to help parents, teachers and caregivers to get kids interested in reading and learning with fun activities and great books.