Learn all about the Eighties for kids with this American History for Kids reader for kids to color and learn! Learn about life in the 1980s with elementary age students from pre-k, kindergarten, first grade, 2nd grade, 3rd grade, 4th grade, 5th grade, and 6th grade students.  Simply print pdf file with 1980s for kids for kids to learn about life in the 80s while having fun coloring the cute pictures and learning about big hair fashion, the walkman, Rubik’s cube, video and the Presidents of the US during this decade.

Whether you are a parent, teacher, or homeschooler – you will love this low-prep activity for helping students learn about the 1980s. One of the easiest ways to help kids learn and remember is to have them read and study the people, the country and the way of life during this era. This american history for kids reader is a great introduction to the 1980s, big hair, the walkman, Rubik’s cube, video and the Presidents of the US during this decade. Use this 1980s for kids lesson with kindergartners, grade 1, grade 2, grade 3, grade 4, grade 5, and grade 6 students.

Start by scrolling to the bottom of the post, under the terms of use, and click on the text link that says >> _____<<. The pdf file will open in a new window for you to save the freebie and print the template.  Now simply print the black and white pages on plain printer paper and cut the pages in half before stapling the book together.

First, you will need to print the pack. Now simply print the black and white pages on plain printer paper and cut the pages in half before stapling the book together. 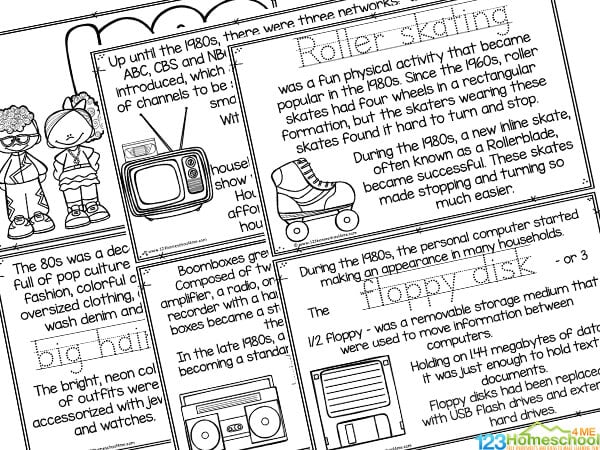 These life in 1980 mini books contain one cover page that children can decorate their own. After this, there are multiple pages all about the 1980s to add behind this. While reading these books, children will learn about: 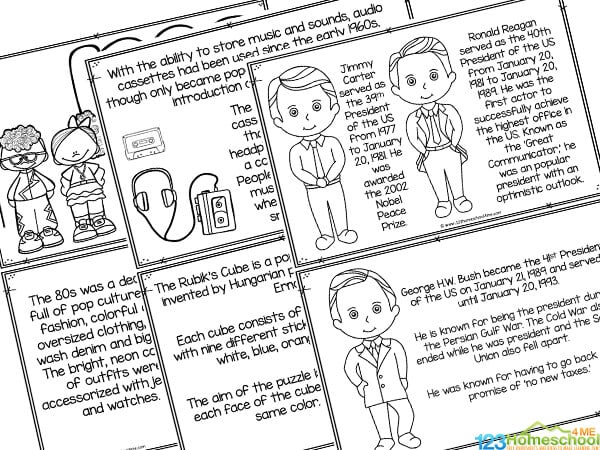 The 80s was a decade full of pop culture and fashion, colorful and oversized clothing, acid wash denim and big hair. The bright, neon colors of outfits were accessorized with jewelry and watches. This decade is sometimes known as the ‘Greed decade.’ During this time, young adults started to become more conservative, settling down in cities, with good jobs. Around the world, there was a lot going on. The Soviet Union fought against Afghanistan, there was a civil war in Ethiopia and the fall of the Berlin Wall in 1989, which started the end of the Cold War.

Previously,  cameras  and their hardware were expensive. In the ‘80s, the prices fell, with families able to enjoy taking photos of everything, everywhere. Instant polaroid cameras were extremely popular, especially with young people. They were able to take photos and see them straight away, bypassing the developing stage. Up until the 1980s, there were three networks; ABC, CBS and NBC. Then cable television was introduced, which allowed a much larger array of channels to be seen by the consumer, for a small monthly fee. With the introduction of the VCR households were able to record on show while watching another show. Households were also able to afford more tv sets, with many houses having more than one.

Boomboxes grew in popularity in the 1980s. Composed of two or more loudspeakers, an amplifier, a radio, one or two cassette players and recorder with a handle for portable, these music boxes became a statue symbol, especially among the young people. In the late 1980s, a CD was introduced, eventually becoming a standard feature on the boomboxes. With the ability to store music and sounds, audio cassettes had been used since the early 1960s, though only became popular in the 1980s due to the introduction of the Walkman.  The Walkman  was a portable cassette player and recorder that contained one or two headphone jacks and only needed a couple of batteries to use. People were able to listen to the music they wanted, when and where they wanted on these small portable machines.

The rubik’s cube is a popular puzzle cube that was invented by Hungarian professor of architecture, Erno Rubik. Each cube consists of six faces that is covered with nine different stickers of six solid colors: red, white, blue, orange, green and yellow. The aim of the puzzle is to make each face of the cube have the same color. During the 1980s, a new inline skate, often known as a Rollerblade, became successful. These skates made stopping and turning so much easier.

During the 1980s, the personal computer started making an appearance in many households. The floppy disc – or 3 1/2 floppy – was a removable storage medium that were used to move information between computers. Holding on 1.44 megabytes of data, it was just enough to hold text documents. Floppy disks had been replaced with USB flash drives and external hard drives. 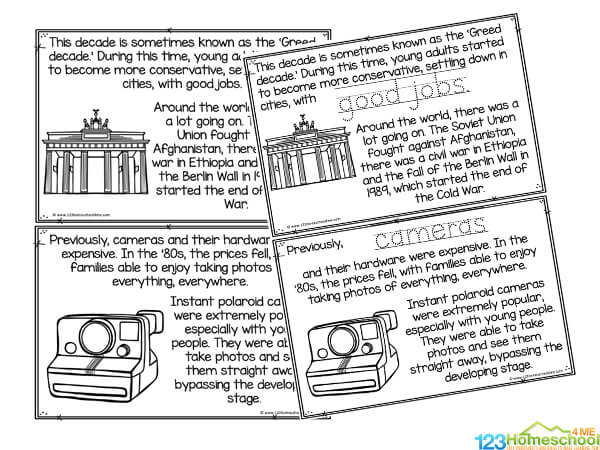 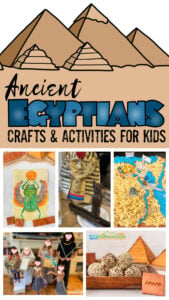 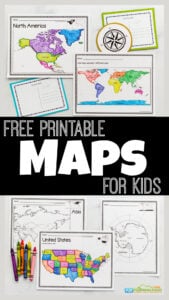 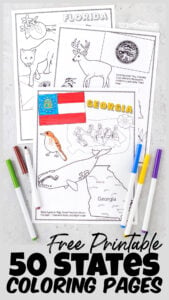 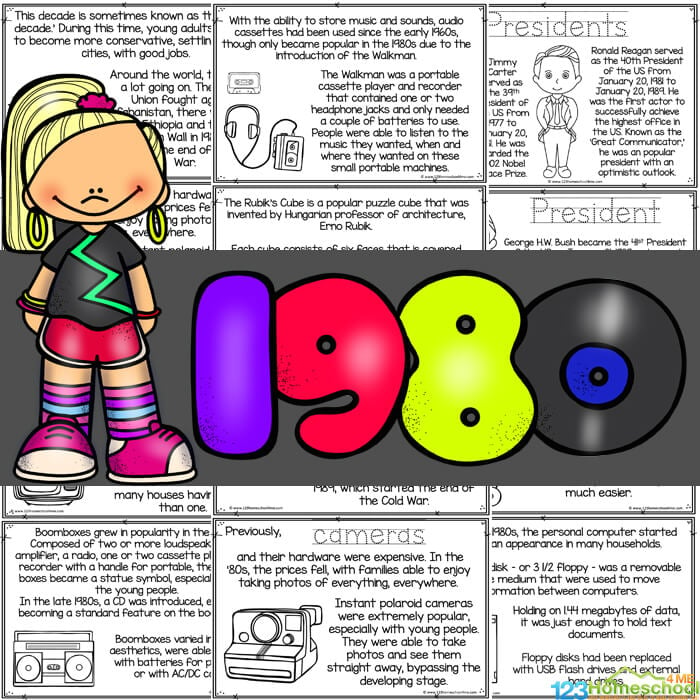