Learn all about the Seventies for kids with this American History for Kids reader for kids to color and learn! Learn about life in the 1970s with elementary age students from pre-k, kindergarten, first grade, 2nd grade, 3rd grade, 4th grade, 5th grade, and 6th grade students.  Simply print pdf file with 1970s for kids for kids to learn about life in the 70s while having fun coloring the cute pictures and learning about platform shoes, pet rocks, the beginning of Star Wars, TV and the Presidents of the US during this decade.

Whether you are a parent, teacher, or homeschooler – you will love this low-prep activity for helping students learn about the 1970s. One of the easiest ways to help kids learn and remember is to have them read and study the people, the country and the way of life during this era. This american history for kids reader is a great introduction to the 1970s, platform shoes, pet rocks, the beginning of Star Wars, TV and the Presidents of the US during this decade. Use this 1970s for kids lesson with kindergartners, grade 1, grade 2, grade 3, grade 4, grade 5, and grade 6 students.

Start by scrolling to the bottom of the post, under the terms of use, and click on the text link that says >> ______ <<. The pdf file will open in a new window for you to save the freebie and print the template.  Now simply print the black and white pages on plain printer paper and cut the pages in half before stapling the book together.

First, you will need to print the black and white pages on plain printer paper and cut the pages in half before stapling the book together. 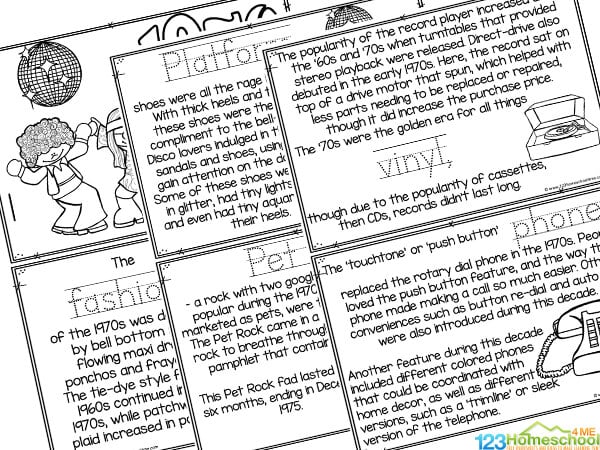 These life in 1970 mini books contain one cover page that children can decorate their own. After this, there are multiple pages all about the 1970s to add behind this. While reading these books, children will learn about: 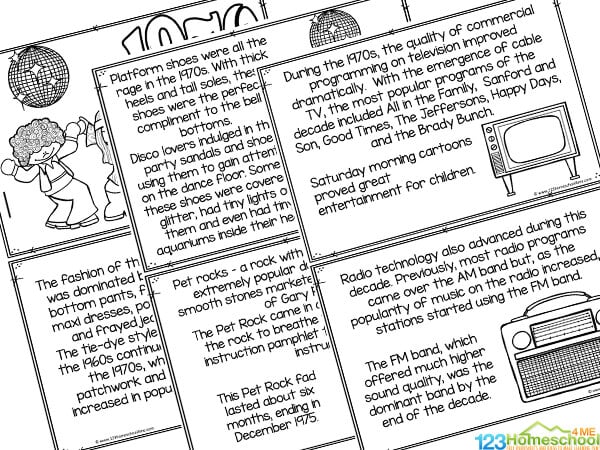 During the 1970s, the quality of commercial programming on television improved dramatically.  With the emergence of cable TV, the most popular programs of the decade included All in the Family,  Sanford and Son, Good Times, The Jeffersons, Happy Days, and the Brady Bunch.  Technology also advanced during this decade. Previously, most radio programs came over the AM band but, as the popularity of music on the radio increased, stations started using the FM band. The FM band, which offered much higher sound quality, was the dominant band by the end of the decade.

The popularity of the record player increased during the ‘60s and ‘70s when turntables that provided stereo playback were released. Direct-drive also debuted in the early 1970s. Here, the record sat on top of a drive motor that spun, which helped with less parts needing to be replaced or repaired, though it did increase the purchase price. The ‘70s were the golden era for all things though due to the popularity of cassettes, then CDs, records didn’t last long. The ‘touchtone’ or ‘push button replaced the rotary dial phone in the 1970s. People loved the push button feature, and the way this phone made making a call so much easier. Other conveniences such as button re-dial and auto dial were also introduced during this decade.

Platform shoes were all the rage in the 1970s. With thick heels and tall soles, these shoes were the perfect compliment to the bell-bottoms. Disco lovers indulged in these party sandals and shoes, using them to gain attention on the dance floor. Some of these shoes were covered in glitter, had tiny lights on them and even had tiny aquariums inside their heels. Pet rocks – a rock with two googly-eyes – were extremely popular during the 1970s. These smooth stones marketed as pets, were the idea of Gary Ross Dahl. The Pet Rock came in a box with air holes for the rock to breathe through as well as an instruction pamphlet that contained feeding instructions. Star Wars opened on the 25th May, 1977 and became an instant blockbuster. Seeing this movie in theaters for the first time was unlike anything the world had ever seen. 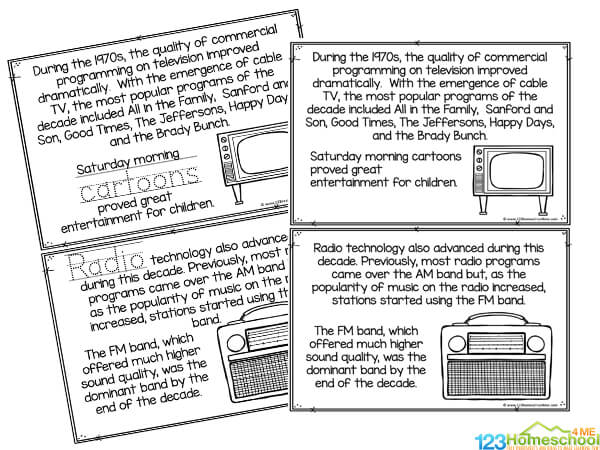 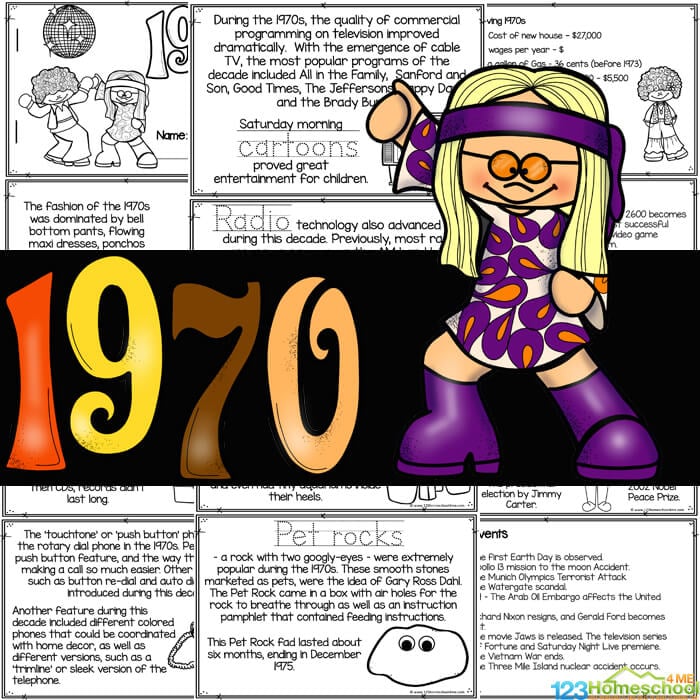