Learn all about the 2000s kids with this American History for Kids reader for kids to color and learn! Learn about 2000s kids things with elementary age students from pre-k, kindergarten, first grade, 2nd grade, 3rd grade, 4th grade, 5th grade, and 6th grade students.  Simply print pdf file with life in the 2000s for kids to learn about life in the year 2000 while having fun coloring the cute pictures and learning about 2000s fashion, U.S. Presidents, the beginning of the internet, the Wii and Playstation 2, and iPods, and more! 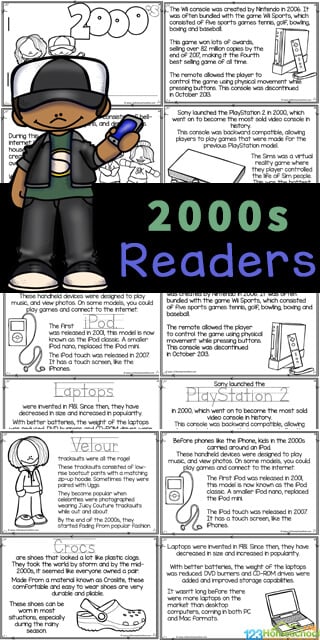 Whether you are a parent, teacher, or homeschooler – you will love this low-prep activity for helping students learn about the 2000s. One of the easiest ways to help kids learn and remember is to have them read and study the people, the country and the way of life during this era. This american history for kids reader is a great introduction to the 2000s fashion, the beginning of the internet, the Wii and Playstation 2, iPods, and the Presidents of the US during this decade. Use this livingin the 2000s lesson with kindergartners, grade 1, grade 2, grade 3, grade 4, grade 5, and grade 6 students.

Start by scrolling to the bottom of the post, under the terms of use, and click on the text link that says >> _____ <<. The pdf file will open in a new window for you to save the freebie and print the template.  Now simply print the black and white pages on plain printer paper and cut the pages in half before stapling the book together. 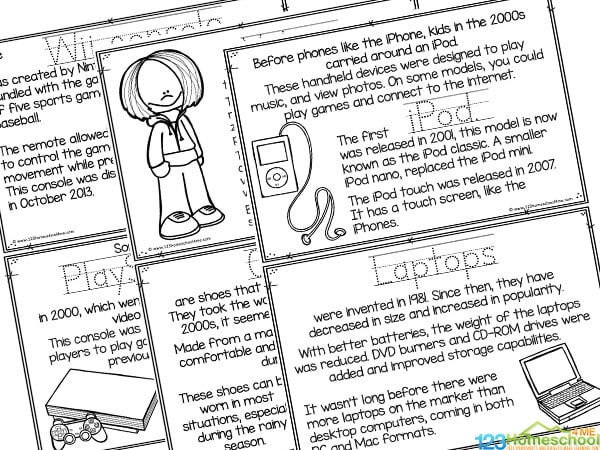 These 2000s childhood mini books contain one cover page that children can decorate their own. After this, there are multiple pages all about the 2000s to add behind this. While reading these books, children will learn about: 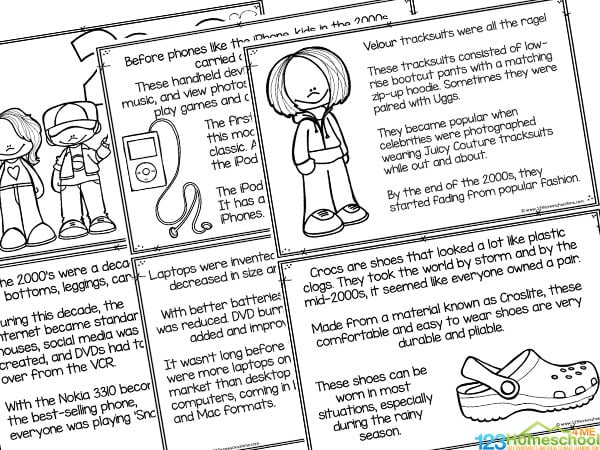 The 2000’s were a decade that consisted of bell-bottoms, leggings, cardigans, and denim skirts. During this decade, the internet became standard in houses, social media was created, and DVDs had taken over from the VCR. With the Nokia 3310 becoming the best-selling phone, everyone was playing ’Snake.’

Velour tracksuits were all the rage! These tracksuits consisted of low-rise bootcut pants with a matching zip-up hoodie. Sometimes they were paired with Uggs. They became popular when celebrities were photographed wearing Juicy Couture tracksuits while out and about. By the end of the 2000s, they started fading from popular fashion. Crocs are shoes that looked a lot like plastic clogs. They took the world by storm and by the mid-2000s, it seemed like everyone owned a pair. Made from a material known as Croslite, these comfortable and easy to wear shoes are very durable and pliable. These shoes can be worn in most situations, especially during the rainy season.

The Wii console was created by Nintendo in 2006. It was often bundled with the game Wii Sports, which consisted of five sports games tennis, golf, bowling, boxing and baseball. This game won lots of awards, selling over 82 million copies by the end of 2017, making it the fourth best selling game of all time. The remote allowed the player to control the game using physical movement while pressing buttons. This console was discontinued in October 2013. Sony launched the PlayStation 2 in 2000, which went on to become the most sold video console in history. This console was backward compatible, allowing players to play games that were made for the previous PlayStation model. The Sims was a virtual reality game where they player controlled the life of Sim people. This was the hottest game of the year in 2000.

Before phones like the iPhone, kids in the 2000s carried around an iPod. These handheld devices were designed to play music, and view photos. On some models, you could play games and connect to the internet. The first iPod was released in 2001, this model is now known as the iPod classic. A smaller iPod nano, replaced the iPod mini. The iPod touch was released in 2007. It has a touch screen, like the iPhones. Laptops were invented in 1981. Since then, they have decreased in size and increased in popularity. With better batteries, the weight of the laptops was reduced. DVD burners and CD-ROM drives were added and improved storage capabilities. It wasn’t long before there were more laptops on the market than desktop computers, coming in both PC and Mac formats. 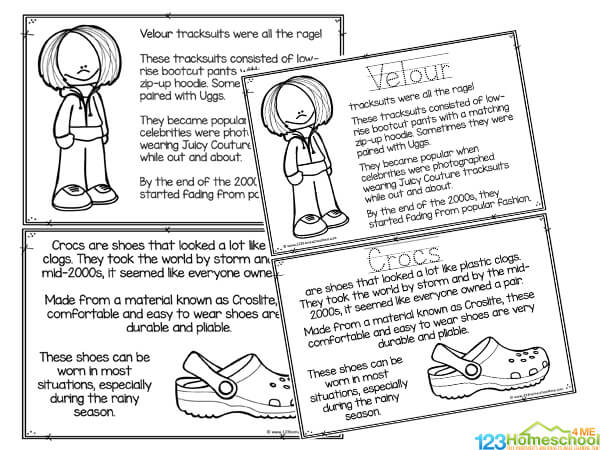 These two books abut early 2000s life are completely in blackline which is not only great for printing, but also a fun way for kids to get creative by decorating the images however they desire. Children can use crayons, markers, colored pencils, gel pens, etc. to color in their books. 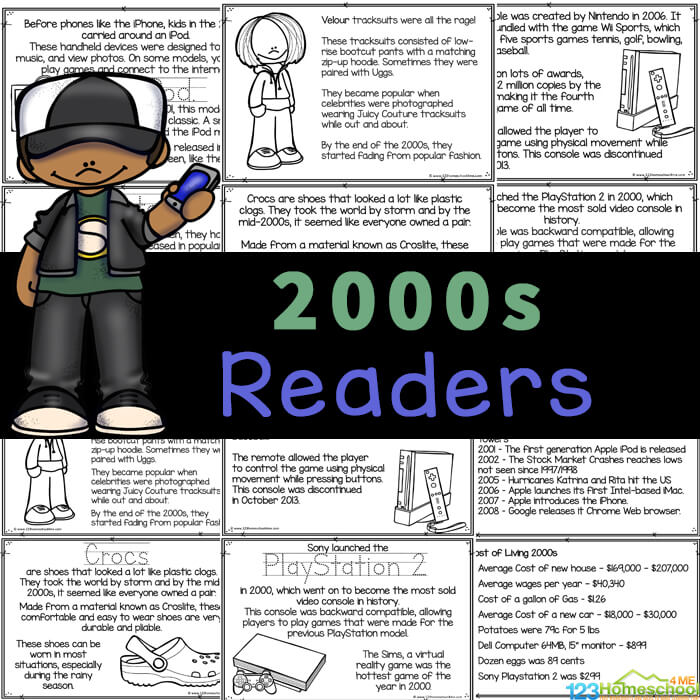