If you are looking for a fun way to explore history with kids, specifically Ancient Egypt for kids, you are going to love this fun, CSI style investigation into King Tut’s early demise. This fun king tut for kids activity includes lots of egyptian printables to learn about the mystery of the 18-year-old pharoah’s death. SImply print the king tut printables and you are ready to play and learn with first grade, 2nd grade, 3rd grade, 4th grade, 5th grade, 6th grade, 7th grade, 8th grad,e 9th grade, 10th grade, 11th grade, and 12 graders too! 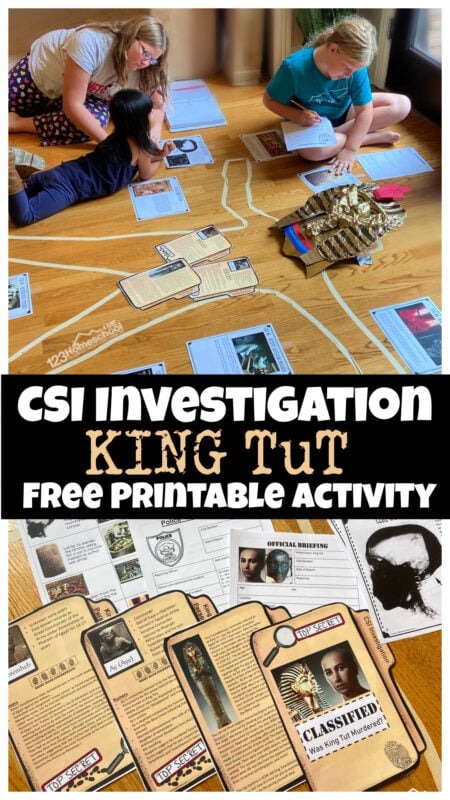 King Tutankhamun, commonly referred to as King Tut, was the pharaoh of ancient Egypt for only 9 short years. After his father Pharaoh Akhenaten died, he passed the throne to his 9-year-old son. Tut married his half-sister, the daughter of Akhenaten and his first wife Nefertiti. King Tut’s rule began in 1332 B.C. The people had been frustrated with his father who had moved the capital and eliminated the traditional Egyptian gods for one god, the son God Atena. As Tut was very young, he relied heavily on two of his father’s former advisors.  At the age of 18, he mysteriously died and there are several theories as to how he died. Was it an injury, was he murdered, was there a power struggle? In this fun CSI style history activity for kids, your students will get a chance to examine the evidence themselves and weigh into the likely result. This fun, hands-on activity will allow elementary, jr high, and high schoolers to examine the physical evidence, archeological evidence, historical evidence, and modern-day science examining DNA and autoposy reports. 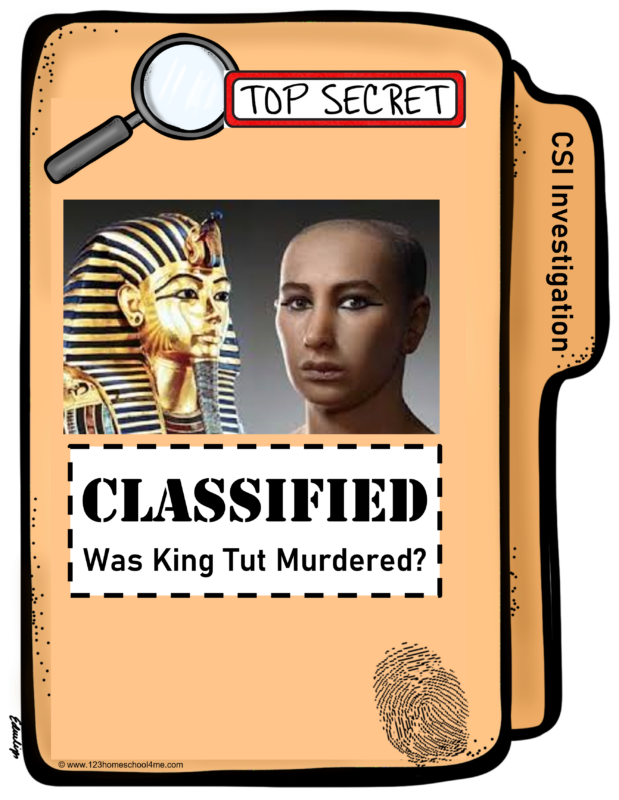 Start by scrolling to the bottom of the post, under the terms of use, and click on the text link that says >> _____ <<. The King Tut printables pdf file will open in a new window for you to save the freebie and print the template. 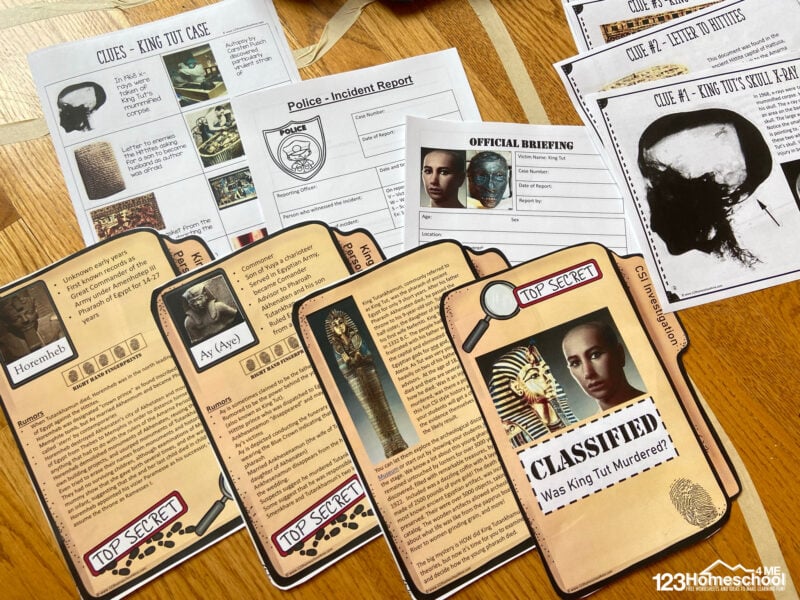 After you have the file, you will want to print the clues to hang around your crime scene and the case files with background information, and files on persons-of-interest in this history mystery.

For each student you will want a

You can let them explore and see the amazing tomb for yourself. YOu can wwatch the above vidoe, or see the archeological discoveries, and/or thirdly explore King Tut’s tomb in the King Tut Museum to set the stage. We know a lot about this young pharaoh because his tomb remained untouched by looters for over 3000 years! It was discovered, filled with remarkable treasures, by Howard Carter in 1922.  Included was a dazzling coffin with 4 layers, the 3rd layer was made of 2500 pounds of pure gold! The death mask – arguably the most known ancient Egyptian artifact, was incredibly ornate and well preserved. Their were over 5000 objects, taking over 10 years to catalog. The wooden artificats allowed archeologists to learn a lot about what life was like from the papyrus boats used on the Nile River to women grinding grain, and more!

The big mystery is HOW did King Tutankhamun die? There are lots of theories, but now it’s time for you to examine the evidence yourself and decide how the young pharaoh died. 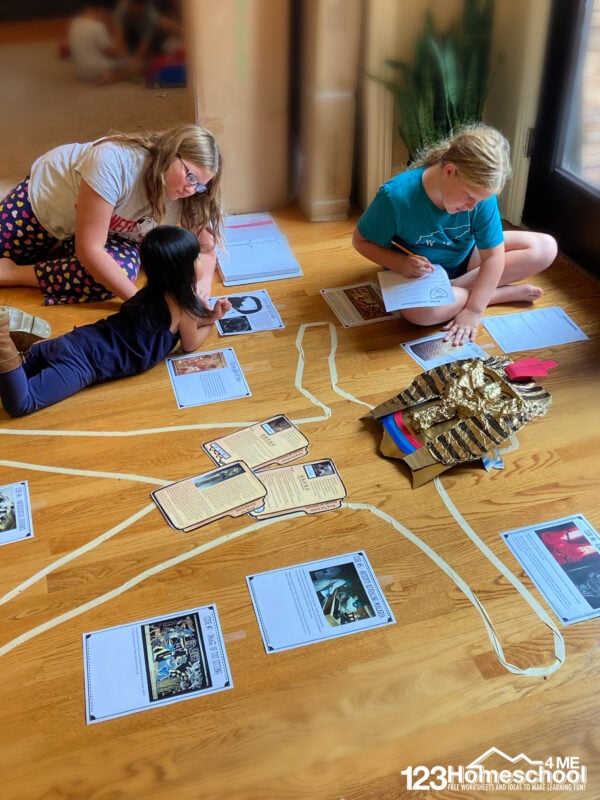 I suggest outlining a student in maksing tape or painters tape for added fun. then tape the clues around the outline or on neighboring walls for students to study and take notes on.  Their is a king tut death mask image in the file to put on the face part (we made a craft one from ancient egypt study) 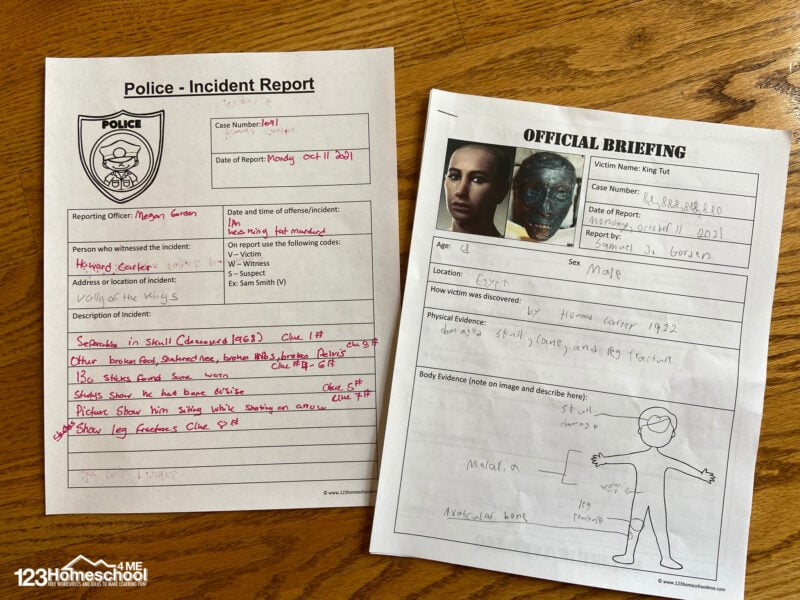 Both the included Police Indident Report for kIds and the Official Briefing  printable are to be printed 2-sided. They are pretty self-explanatory. I love seeing what different ideas the kids came up with!  It is a great way for kids to use critical thinking skills and to exame evidence. If you watch videos from the subjects you will find major sites like history.com, national geographic, and others will disagree on the cause. So don’t worry about finding the “correct answer” because there isn’t ONE answer. Just that they thought through the evidence and made a possible or logical conclusion!

King Tut was Murdered by Aye

One of the advisors to King Tut was Aye, also referred to as Ay. Aye not only became Pharoah after Tut’s untimely demise, but he married King Tut’s wife, Ankhesenamun, shortly after her husband’s death.  Research shows that Aye may have forced Ankhesenamun to marry him to make his rule of Egypt more legitimate. Stone tablets were uncovered that show her making a “last-chance” attempt to save the kingdom by begging for a Hittite prince (their long-time enemy) to marry her, possible to keep Aye from the throne.  So their was motive, but does the evidence suppor this hypothesis?

King Tut was Murdered by Horemheb

The other advisor was a military general named Horemheb. Many researchers believe that King Tut gained more independence the older he got and he relied less and less on Haremheb. After Tut died, Aye ruled the empire for four years until his death. But after his death, Horemheb took over as ruler. He restored the traditional Egyptian religious practice of plytheism, more than one god. Horemheb abandoned Amenhotep IV’s new capital and returned to the historic capital of Memphis. He even removed King Tut’s name from several significant temples and monuments and inserted his own name.

Or perhaps Aye and Horemheb worked together to get rid of Tut. And remember that Hitite prince Ankhesenamun begged for, well he never made it to Egypt. Although King Tut did die rather young, life expectancy at this time was only 33 years old.

The pharoah was very young to have died naturally, so perhaps he died of illness or injury. Modern scientists have conducted DNA tests and have revealed King Tut suffered from a disease known as avascular bone necrosis. This would have caused his bones to be deprived of essential blood supply. Although that would not have killed him, if he had an injury or infection it would have made it much worse. Further investigation revealed that Tut also had malaria. But many live with malaria and while it affects quality of life, it isn’t a death sentance. Malaria would explain why a cain was found in his tomb and in illustrations.  In 2013 a researcher conducted an autopsy on King Tut’s mummified corpse and the results revealed the young king’s entire left side of the body had injuries: broke foot, shattered kneecap, shattered ribs, and a broken pelvis. Dr. Naunton’s findings may explain a further scenario where King Tut died as a result of injuries from falling from his chariot during a chariot race, a common sport in Ancient Egypt.

So, how do you think King Tut died? 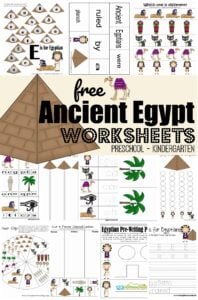 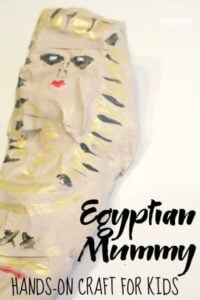 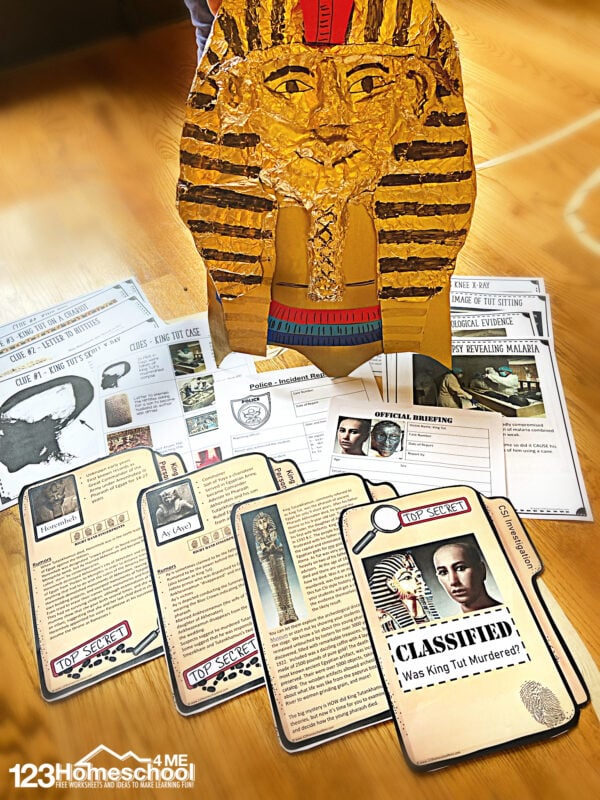