Gilgamesh History for Kids is the second part our hands on Ancient Mesopotamia history unit for kids. This is great for elementary age kids to learn together with fun activities, crafts, and activities. 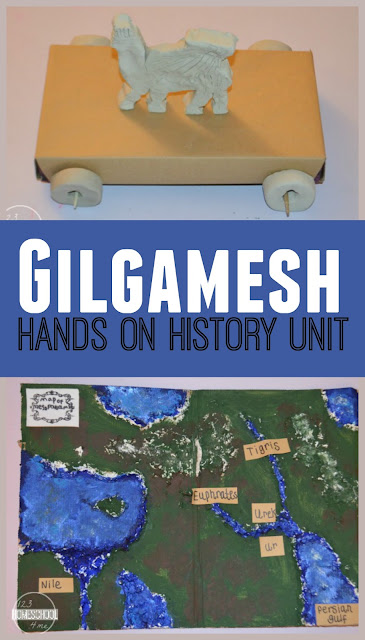 This Gilgamesh History for Kids will focus on the first book of the recommended trilogy, Gilgamesh the King, as well as using the Eyewitness Mesopotamia book to dig a little deeper: 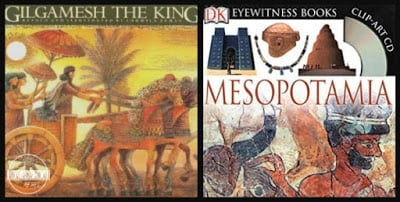 The tale of Gilgamesh is one of the oldest epics recorded. An epic is a long poem which tells of the adventures of a hero and his success at overcoming the most terrible circumstances. Gilgamesh is the hero in this Sumerian epic, based very possibly on an actual king of Urek. Although recorded in 2000 BC it is likely that the epic of Gilgamesh had been around for much longer and passed down the generations using oral tradition, which was commonplace throughout the ancient world.

The first book covers the story of Gilgamesh, the most powerful king of all the world, and his meeting with Endiku, the challenger sent by the gods to keep Gilgamesh in check. They meet in battle with neither able to defeat the other, until at last they become friends.

The pictures and words of this first book are delightful and I have used them to guide our learning. This month your children will:

This month’s recipe is pitta bread (or unleavened bread). 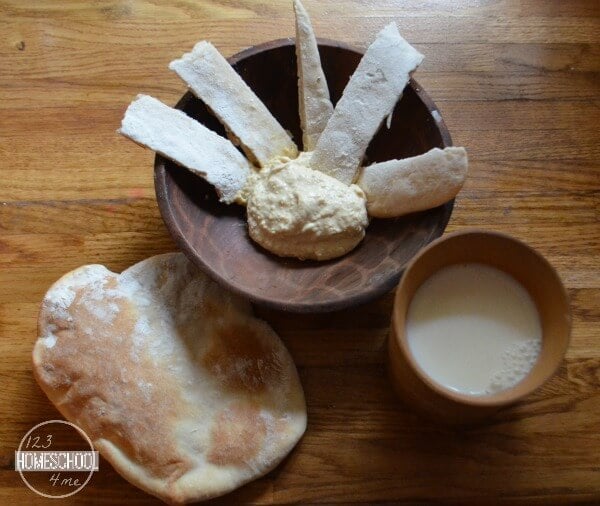 Mix three heaped cups of flour with half teaspoon of salt and a cup of water. Knead well and divide into small, flat patties. Cover with a tea towel over night and bake in a 180 degree Celsius oven (350 Fahrenheit) for 30 minutes. Allow to cool, before cutting them into strips to dunk in the humus. Serve with a cup of goat’s milk: 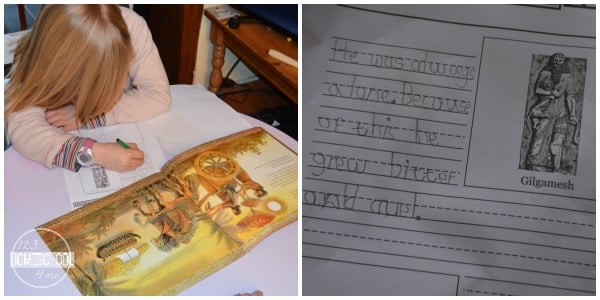 There is so much to discuss in this book, so do feel free to chat about anything that appeals to your children. My girls and I touched on:

I chose copy work passages from the book which introduced interesting words. You can choose anything you wish: 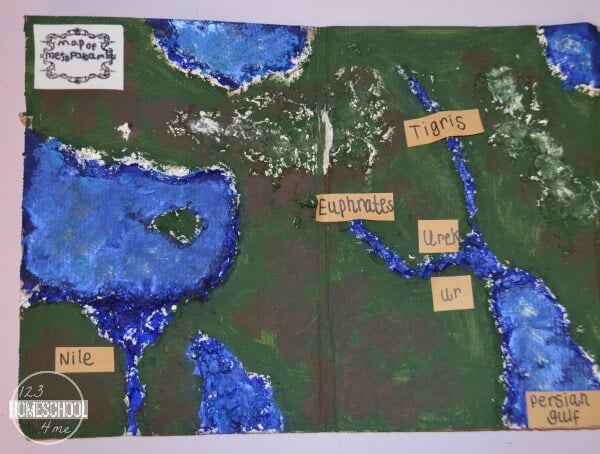 A7 titled the map ‘Ancient Mesopotamia‘ using a sharpie. She labeled Urek, Ur, the Tigris River and the Euphrates River, the Persian Gulf and the Nile: 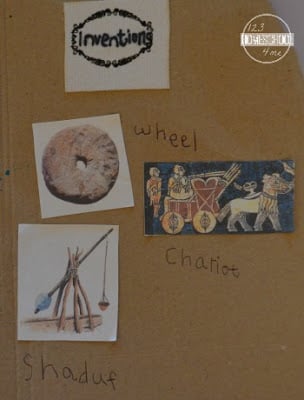 She also stuck images of a Mesopotamian wheel, chariot and Shadduf on the side flap and labeled them:

Our map so far: 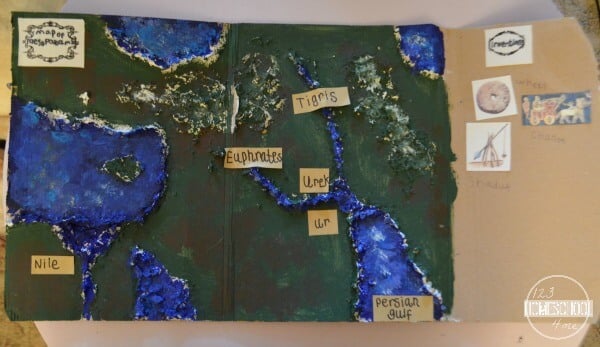 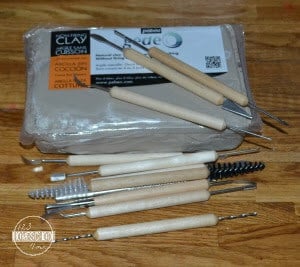 Point out the illustration of the statue which seems to have a man’s head with the body of a winged bull to your child on page 4 of Gilgamesh the King. Three additional statues may be seen on the last double page of the same book. These are statues of a lamassu, which was a protective spirit in ancient Mesopotamia mythology. A statue of a lamassu guarded the throne room in the palace at Nimrud. The original statue can be found on page 7 of the Eyewitness Mesopotamia book. Share this with your child before exploring page 14 and 15 of the same book, about the gods and goddesses of ancient Mesopotamia.

Make a model of a lamassu 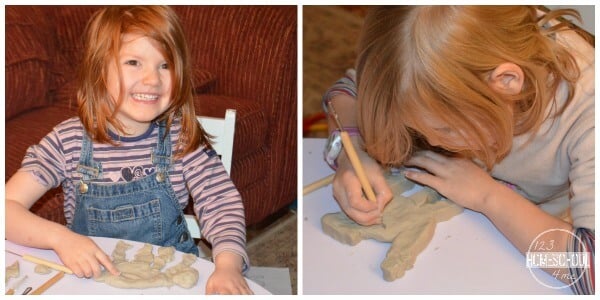 Using a chunk of clay and some clay tools, give your children a photocopy of a lamassu or open the book on the correct page and ask them to try to recreate the lamassu statue:

This could also be done using play dough but the results would be less detailed. My girls worked on their statues for ages. This was a more successful activity for my seven year old, because her one stood upright just like the one in the book, which was perfect for the next activity: 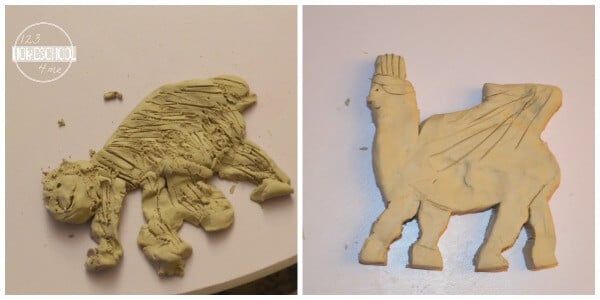 Leave the lamassu to dry overnight.  Keep them safe as they will be needed to illustrate just how useful the invention of the wheel was.

The wheel was first used in ancient Mesopotamia, but not for travelling. It would be used solely as a potter’s wheel for years before it became a wheel for transportation. This was a gradual process, which handily pages 3 and 4 of Gilgamesh the King demonstrates.

I asked the girls to point out any wheel like structures they could see. They found the wheel attached to the wheel barrow type vehicles, but took a while longer to notice the round tree trunks under the lamassu statue. This was the very first effort at making a wheel.

Explore pages 38 and 39 of the Mesopotamia Eyewitness book, which explain the history of the wheel in a little more depth.

Make your own wheeled transport 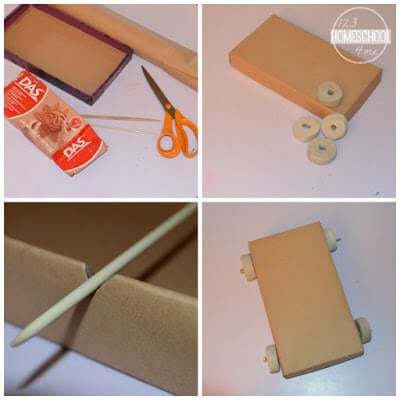 Collect a shoe box lid, brown paper, scissors, double sided sticky tape, knitting needles (pencils, straws or chop sticks would also work) and clay. Cover the lid with brown paper and make wheels from the clay, leaving overnight to dry. Cut a two wedges from each long side of the lid, ensuring the opposite wedges are parallel to each other. Rest the axles in the wedges and place the wheels on the axles, as shown above.

I used some thick wooden dowels to demonstrate to the girls how the rollers worked, using the model of the lamassu as cargo (much like the picture in the book): 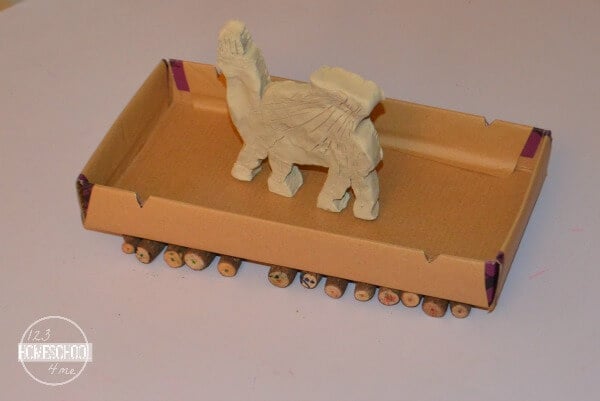 We then replaced the rollers with the wheels and saw how much easier it was to transport our lamassu model using these compared with the rollers: 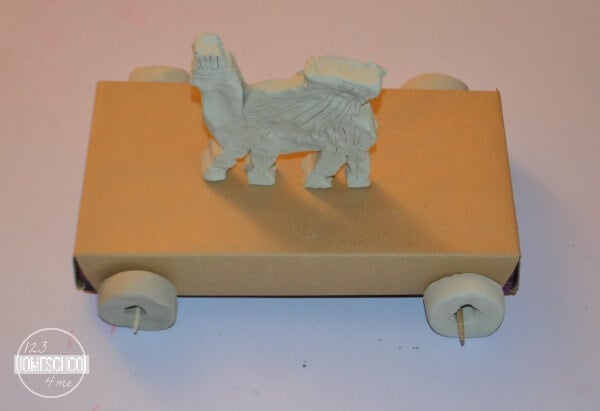 Other inventions of Ancient Mesopotamia include the chariot, the sailing boat and the shaduf. As an extension activity, you could ask your children to make their own model of any of these. For more information and to see a couple of models we built a few years ago see here and here.