To be fair, this experiment does not ACTUALLY defy gravity. (Anti-gravity is really just science fiction.) However, it definitely APPEARS to defy gravity. By combining this “anti-gravity” experiment with a couple other simple experiments involving a ping pong ball and air flow, kids will not only be amazed and impressed, but will learn a little about the science of air pressure as well. 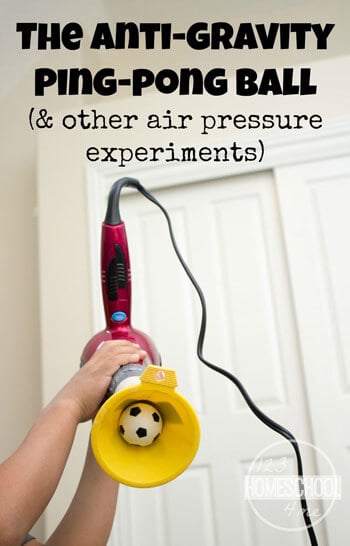 The basic concept that kids will discover when doing these experiments is that flowing air seems to pull a light object such as a ping pong ball away from still air. The reason for this is that moving air has a lower air pressure than air that is not moving. Kids that have a basic knowledge of forces and pressure will understand that an object between a region of low pressure and high pressure will feel a force moving the object away from the high pressure and towards the low pressure.

Kids desiring an even deeper understanding of this phenomena can be taught Bernoulli’s equation. 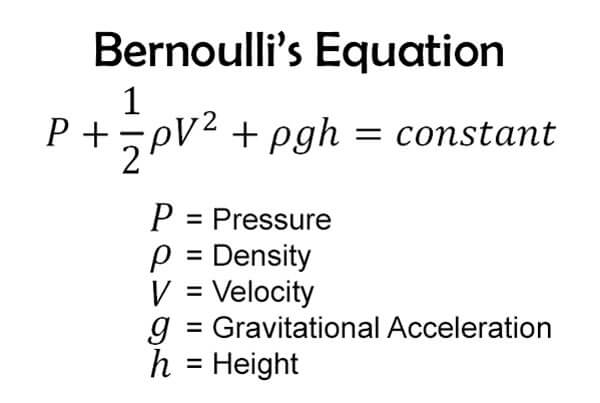 This equation is only valid for incompressible fluids, meaning fluids with constant density.

Bernoulli’s equation mathematically explains the relationship between pressure, velocity, and elevation. From this equation, it becomes clear that when velocity increases, pressure must decrease. By thinking about where the regions of low pressure and high pressure are in each of these experiments, kids can actually predict the way the ping pong ball will behave. However, without going through this process, the movement (or lack of movement) of the ping pong ball seems completely counter-intuitive.

With the 5 supplies mentioned below, kids can not only perform the anti-gravity experiment, children can also quickly and easily levitate the ping pong ball using a hair dryer and see what happens when they try to blow a ping pong ball out of a funnel.

First, the best way to start is to ask your child if they think they can blow a ping pong ball upward and out of a funnel. My 3.5 and 6 year olds were both completely convinced that they could. Even my husband thought that he would be able to do it. It turns out, this task is basically impossible. The harder you blow, the more the ball is pulled back into the funnel. 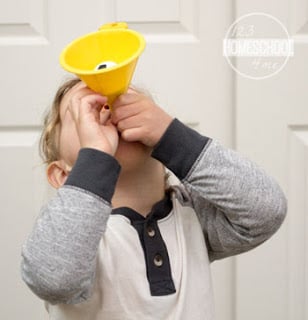 The reason for this is that the air flows through the funnel and around the bottom half of the ball, creating a region of low pressure that effectively sucks the ball into the funnel.

The anti-gravity experiment uses this same phenomena, but with the powerful, consistent flow from an air dryer, the funnel can be held upside down and STILL hold the ball inside the funnel. To start, tape the funnel onto the blow dryer using the toilet paper roll and duct tape as shown. 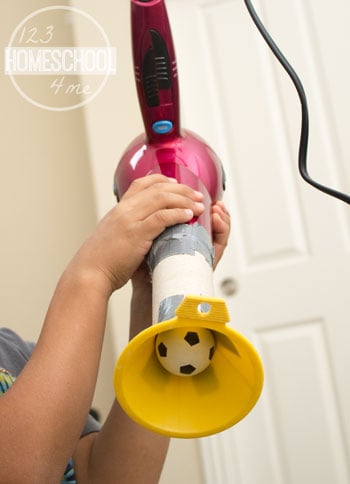 If before doing this experiment you ask the child (or most adults) what they think will happen, nearly everyone will assume that the blow dryer will blow the ball out of the funnel, especially when the funnel is upside down. However, with the high flow near the funnel-side of the ball and the stagnant air on the far side, the pressure difference is enough to counteract the force of gravity.

Lastly, since you will already have a ping pong ball and blow dryer handy, do the ever-popular floating Ping-Pong ball trick. Simply place the ball inside the column of air flow and watch it hover in space. 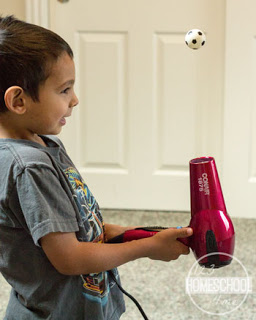 Depending on the strength of your blow dryer, you may even be able to tilt the blow dryer slightly and still keep the Ping-Pong ball from falling. The stability in this experiment comes from the fact that the fast moving column of air from the blow dryer is at lower pressure than the surrounding still air. As the ball starts to fall to one side, it is pushed back into the column of air due to the pressure difference. Even preschoolers with steady hands can perform this trick on their own. 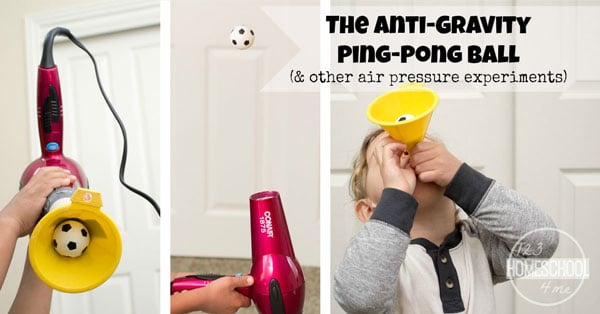