Subtraction Bingo is a perfect way to practice subtraction problems with your first grade, 2nd grade, and third-grade student. This is just one of our cool math games

Sure, we could use boring old subtraction worksheets, but Bingo is so much fun more fun!  This free printable bingo game allows the players a choice in what number they will be covering up….and they get to practice subtraction too.

I’m not sure why, but for the majority of students, addition is easy. Then subtraction is introduced, and things get a little harder. Add on subtraction with regrouping, and many little ones feel overwhelmed.

My first grader has just started subtraction with regrouping, and I didn’t want him to be overwhelmed. I decided to introduce it slowly and with lots of manipulatives. Using a file folder activity, I began the teaching process. We continued our learning while enjoying the game “Don’t Take My Blocks“. But now is the time to practice.

Though he needs to do numerous problems to cement this learning in his little mind, I’m not a big fan of having a child sit and do worksheets while practicing the same type problems over and over. So how do I get that extra practice in?? Simple, with a game. 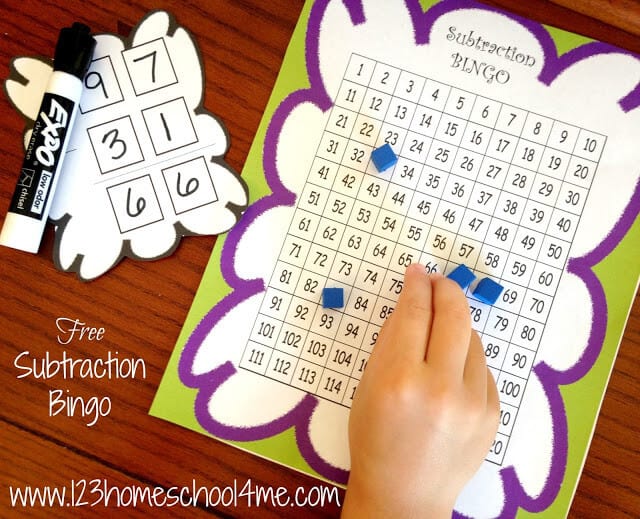 As always, when a game comes out my boys run to join me. They are competitive little guys and they are always happy to help me see if a new game works.

We started off by drawing four cards from our deck and creating an expression. I was prepared to remind N, my first grader, to make sure he created an expression with the larger number on top, but I was thrilled that he did it without a reminder. Once he solved his problem, we checked it using the numbers chart.

Now came the fun part!! N knew he wanted his next answer to be close to his first answer, so he didn’t create just any expression. He played with the numbers till he got an answer close to the previous one. Here he was problem-solving, doing some estimation, and practicing subtraction problems.

Here is how you play this no prep, second grade math game for practicing subtraction:

Here is how to Play Subtraction Bingo: 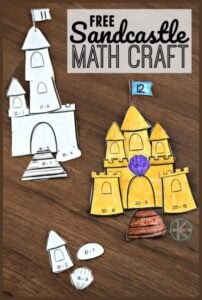 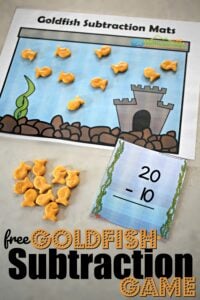 Looking for more subtraction worksheets and subtraction games to make learning to subtract fun? Check out these subtraction math ideas and free resources: 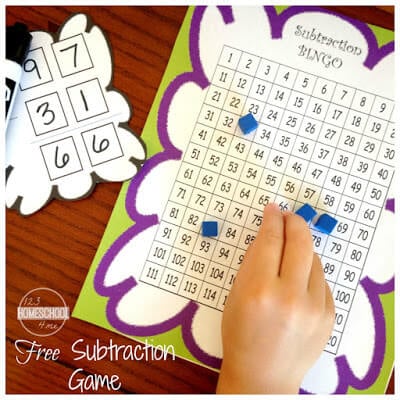 Before you download your free pack you agree to the following: