Kids love using these Math Cootie Catchers as a fun way to practice adding, subtracting, number sense, doubling, number recognition, and more.  These math games printables allow preschool, pre-k, kindergarten and first graders to get excited about math while having fun. Simply print math cootie catchers pdf and you are ready to play and learn! Some kids are very reluctant learners when it comes to learning or practicing math. For these children, sometimes you need a little something extra to get them to be willing participants. These super cute math cootie catcher activity is fun for preschoolers, kindergartners, and grade 1 students. Start by printing the math cootie catchers pdf and pick the type of math you need to work on. The printable math game includes subtraction, addition, numbers, doubling, and more! Then following the simple step-by-step directions in the set to fold your math game.

Start by scrolling to the bottom of the post, under the terms of use, and click on the text link that says >> ____ <<. The math printables pdf file will open in a new window for you to save the freebie and print the template.

All you need to try this free printable math game are a few simple materials including: Wondering how to play this kindergarten math game? These Cootie Catchers use a combination of written numbers, tally marks, ten frames, groups of dots and shapes, and fingers.

Addition: For this Cootie Catcher, children need to solve the problem presented to them while they play. The outer flaps are numerals. The next layer of flaps contain tally marks and fingers. The inside flaps contain heart ten frames and dots. If your child is not familiar with tally marks or ten frames you’ll need to teach them about those first.

Subtraction: This Cootie Catcher uses the same types of number formats as the Addition.

Doubling: For this Cootie Catcher children need to double each number they see. The outer flaps are numerals. The middle flaps are tally marks and ten frames and the inside problems are groups of shapes. 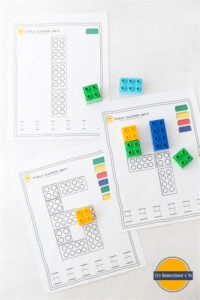 This is such a fun, hands on math game for kindergartners that helps achieve fluency while having FUN!