Your kids are going to be blown away by this fun, colorful capillary action experiment that teaches a simple science principle . Use this capillary action for kids project with toddler, preschool, pre-k, kindergarten, first grade, 2nd grade, and 3rd grade students. This capillary action science experiment is sometimes called a walking water experiment. No matter what you call it, this beautiful walking rainbow activity is sure to AMAZE kids of all ages!

This capillary action experiment will amaze kids from toddlers, preschoolers, and kindergarteners to grade 1, grade 2, and grade 3 students. You only need a couple simple materials you most likely already ahve tohome: paper towels, water, and food coloring to watch capillary action in most with this beautiful capiarlly action science experiment. Children will very quickly be able to watch as water moves or travels and by doing so it will create a beautiful rainbow, introduce color mixing, and delight young learners as they try to understand what just happened! This capillary experiment will produce a WOW moment for sure and is such an easy science experiment for kids!

Kids are naturally curious about the world around them. They ask lots of questions and perform their own experiments. Just look at a toddler who decides to blow into his milk to see what will happen. It sometimes takes them a lot of trial and error, but eventually they realize it will bubble up over the top of the glass and make a mess. Preschoolers stomp in water or mud puddles to see what will happen and then continue to jump more as they realize it makes things spray up and make a mess. Kindergartner find a worm, ladybug, spider, or other insect and follow it around the yard, pick it up and observe it.

Children are little scientists. It is us adults that teach them to stop exploring and trying new things when we harshly yell stop blowing bubbles in your milk instead of saying, it made a mess when you blew bubbles in your milk didn’t it. Let’s try a different activity. They need to know guidelines, methods to explore around them so they can investigate without causing mayhem or large messes. 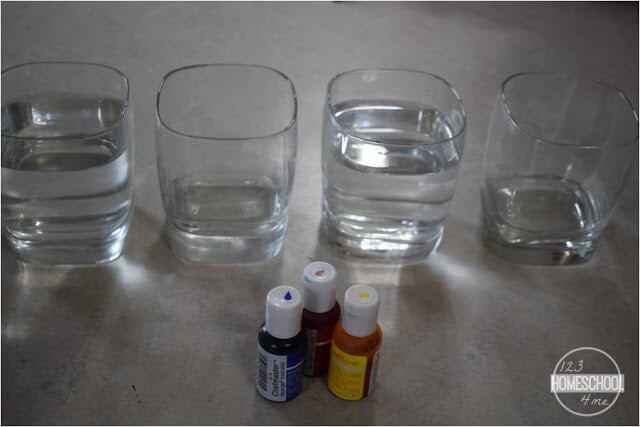 This super easy science experiment for kids will become a favorite as it amazes kids and is so simple to perform all at the same time! Whether you are a parent, teacher, or homeschooler – you’ve got to try this kids activity!
Start out by putting 7 glasses on the counter. Fill glasses 1, 3, 5, and 7 most of the way up with water. 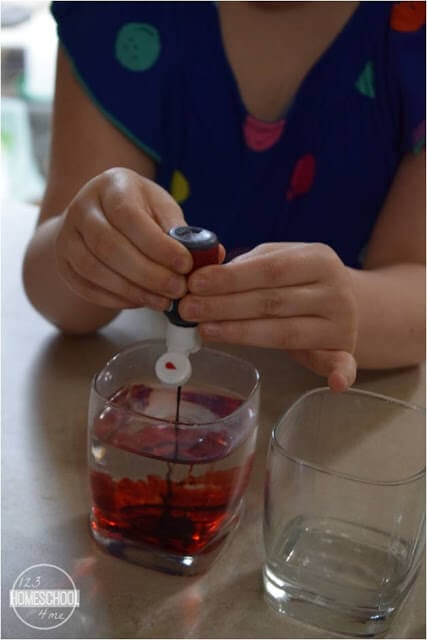 Next add food coloring to the glasses: 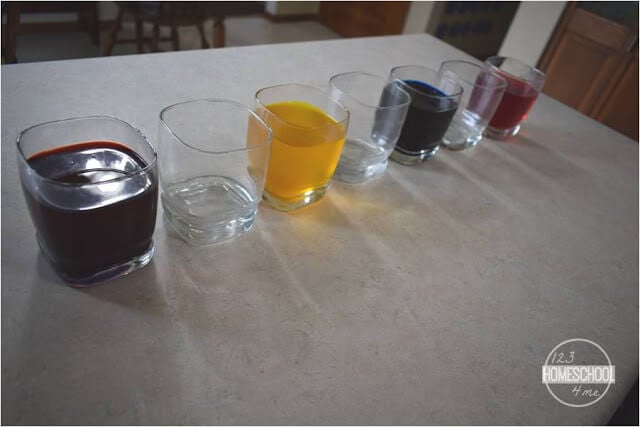 Now, your experiment set-up should look like this. It looks simple enough; my kids weren’t so sure this would be very intersting or fun…. but boy were they amazed when the capillary action science fair project started working! 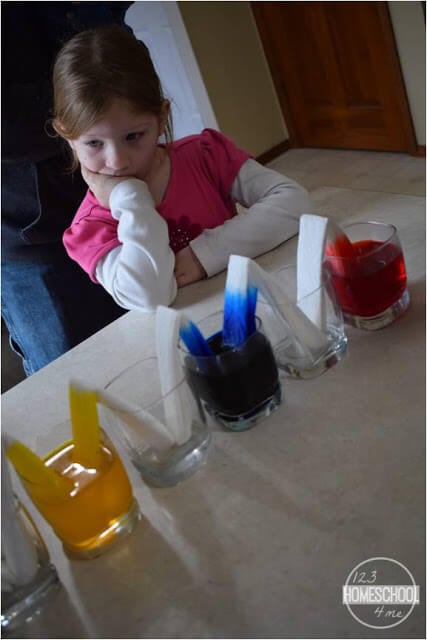 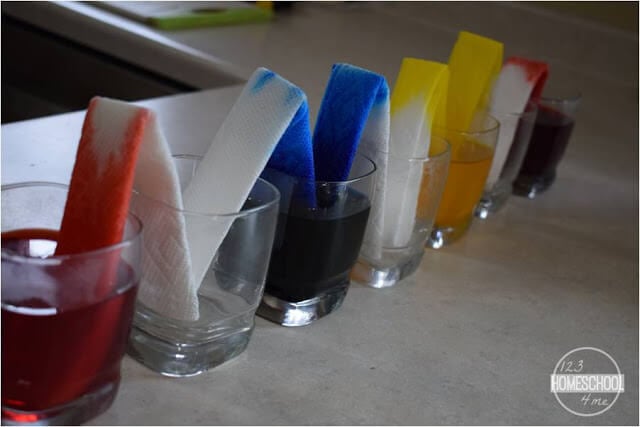 Here comes the fun part! Watch capillary action in motion as the water climbs up the paper towel. This is how the science experiment got its nick name Walking Water Science Experiment.
This is such a simple and FUN way for  how to explain capillary action to preschoolers 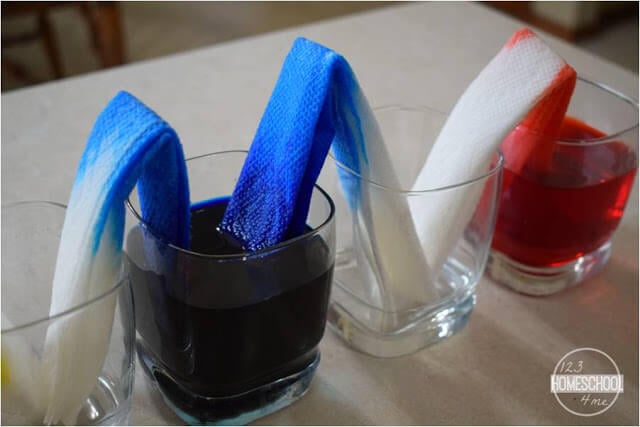 Capillary action is the process in which a liquid moves up something solid, like a tube or into a material with a lot of small holes. This happens when 3 forces called cohesion, adhesion, and surface tension work together. Water molecules are considered cohesive (sticky to each other) and they adhere (stick) to the paper towel. As one water molecule moves up the paper towel it pulls the other molecules with it. The molecules pull each other along like a drawstring. 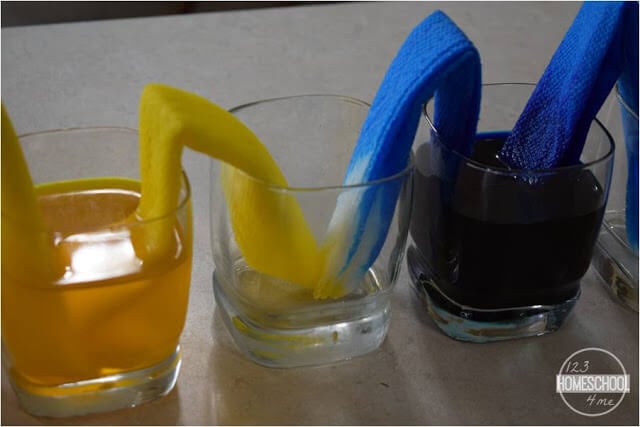 Notice how the water has walked or moved along the paper towel.
Ask your kids to make a prediction on what is going to happen next! You can always direct their answer to help them to see the yellow water and the blue water are moving into the same cup. What do yellow and blue make? 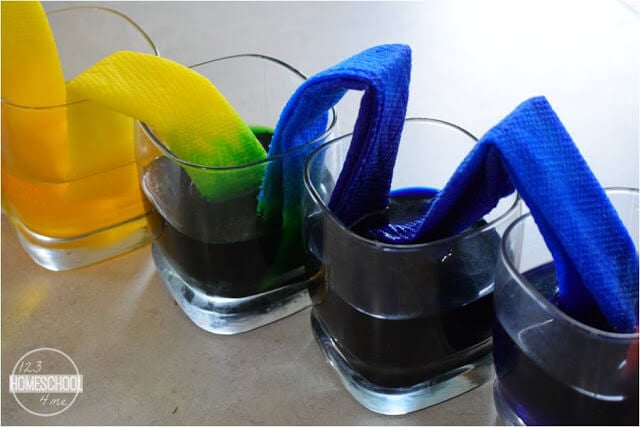 How cool is that?! The cup that had nothing in it is now equally filled with the ones on either side. The water stops walking when the water is at the same level next to it. 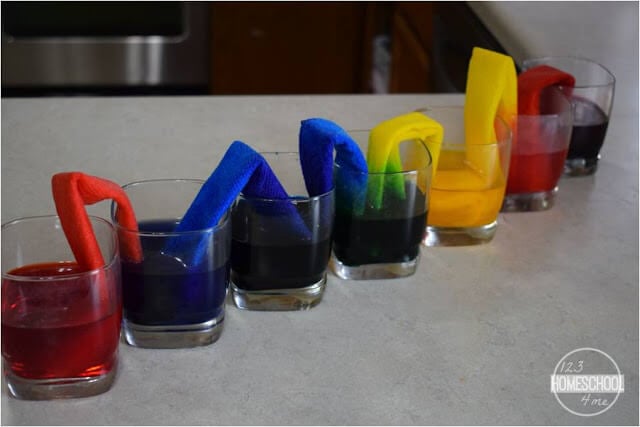 Here is what you end up with – a beautiful rainbow of colors that walked and mixed by itself  while your kids observed capillary action first hand! 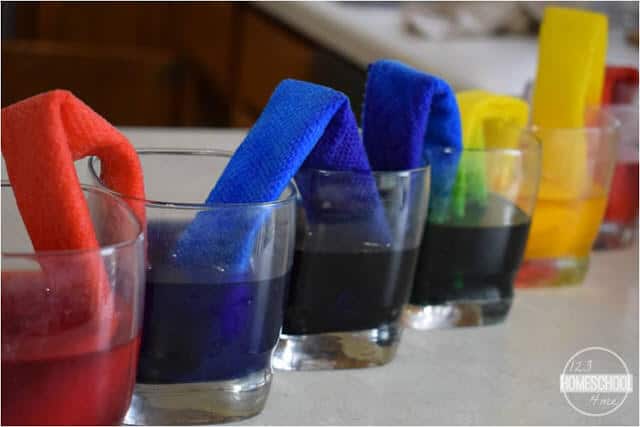 How beautiful is it when the water has finished walking, saturating the paper towels?! You have lots of vivid colors, color mixing to form 3 new colors, and have a better grasp on what capillary action is with your grade 1, grade 2, grade 3, grade 4, and grade 5 students. 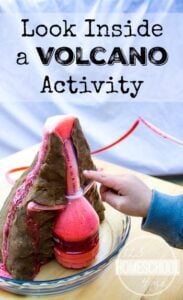 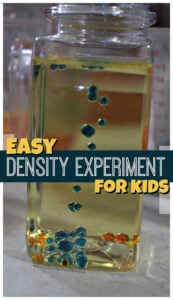 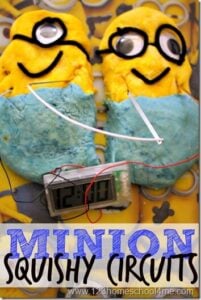