Get ready to be the COOLEST MOM EVER!! This New Years Coundown for kids is not only fun and engaging, but educational too as kids learn about time zones and other countries! 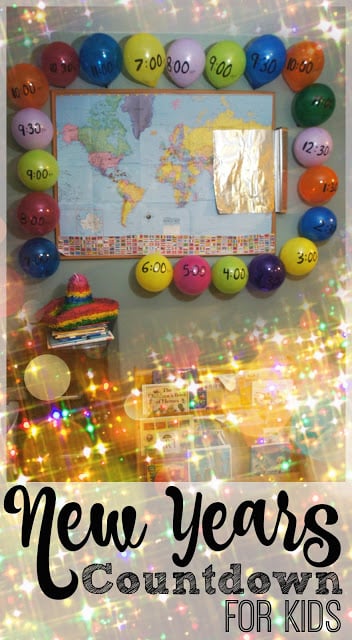 This year, inspired by this idea we decided to learn some geography while having our Kids New Years Eve Party.

It was an all day celebration beginning at 7am going until 9:30 (or midnight if you like). We learned where various countries were located on a map, how time zones
worked, a little bit about each country we celebrated, and had fun popping balloons as we went. 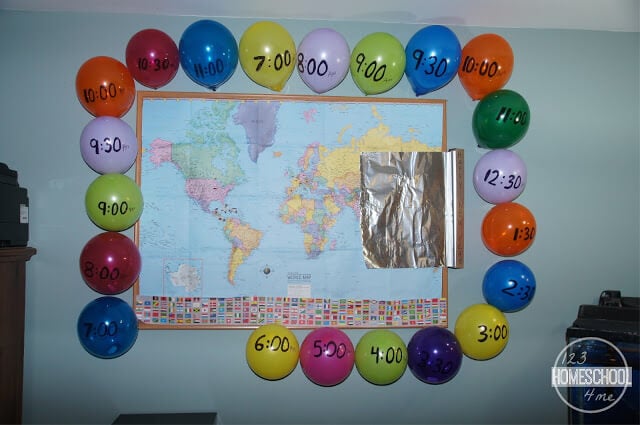 I used Time and Date website to figure out what countries were ringing in the new year when. Then I figured out something fun to do for each country and wrote it on a piece of paper and put it in a balloon. Then I stuck the paper in a balloon, blew it up with helium, tied the balloon with a string, and wrote the time this country would ring in the new year on the
front of the balloon with a sharpie.  This was so much fun and will be enjoyed by kids of all ages! Plus the kids loved that our party lasted all day long! 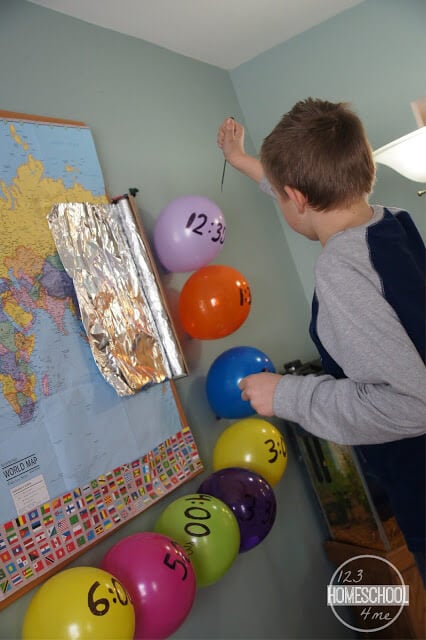 The roll of foil unrolled as the New Year started sweeping the globe. It was a great way for kids to visualize how time “moves”.

We started our celebration at 7am (US Central time) when much of Australia
was ringing in the new year by making a traditional Auzzie Brekkie – Bacon & Egg Pie. and read Australia ABCs. 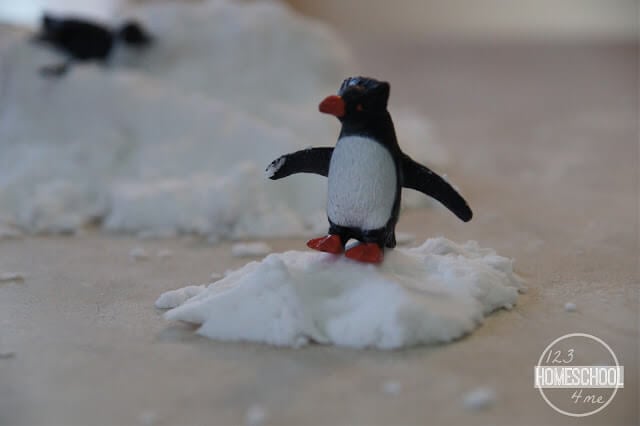 At 8am we celebrated Antarctica (it is a huge continent that could be
celebrated at many different times throughout the day) by reading Antarctic Antics: A Book of Penguin Poems (if your library
has the Scholastic Book Flix on line this is a fun story to watch), make 2 ingredient sensory snow. 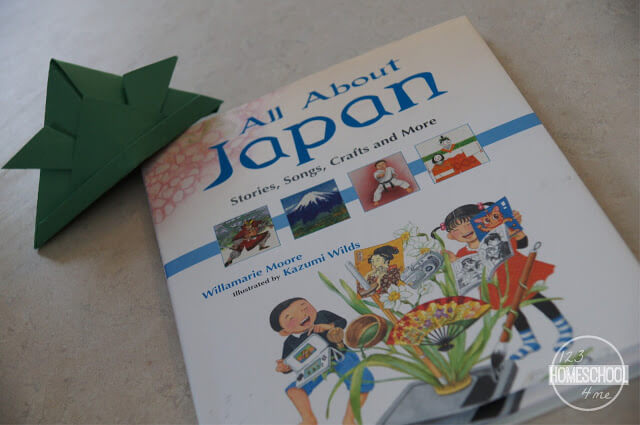 At 9am we celebrated the New Year with Japan. We read All About Japan and made these origami Samurai Hats from the
instructions in the book. 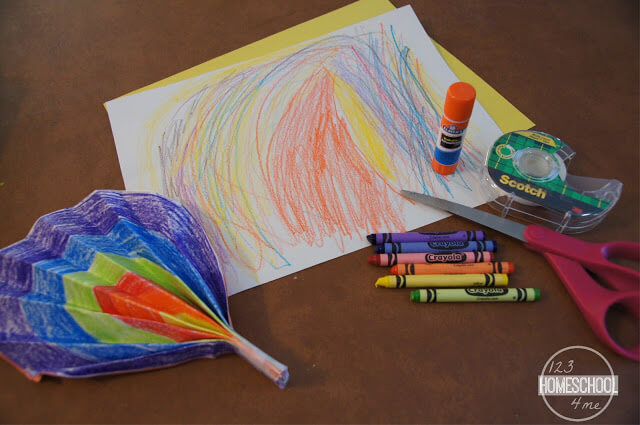 At 9:30  North Korea enters the new year and we read K is for Korea and made a Korean Fan or Korean Board Game 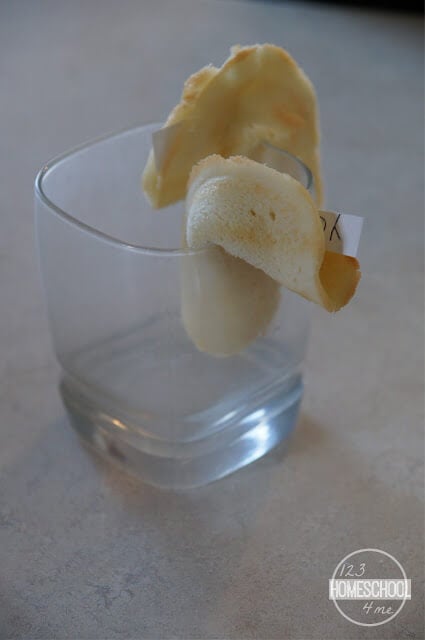 At 10am China celebrates the new year. We read China ABCs, we made some Chinese Lanterns, Homemade Fortune Cookies, and practiced
using chopsticks to move cotton balls from one bowl to another.

We celebrated the new year in Thailand at 11am by making elephant art using
foil (this method) and eating some traditional Thai food – Curried Coconut Chicken with rice. 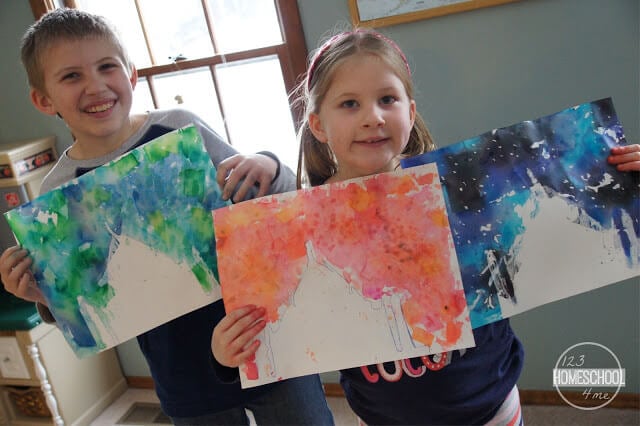 At 12:30 India has moved into the new year and we celebrated by reading T is for Taj Mahal: An India Alphabet and we made a Taj Mahal artwork.

At 1pm we found Pakistan on a map and at 1:30 we located Afghanistan on a map. We used this time to pray for countries around the world and talked about how all
countries do not live with freedoms that we Americans have.

At 2:30 we found Iran on a map. Depending on the age of your children you can either make a Cheetah mask – Cheetah’s can now only be found naturally in
Iran. Or for a more involved project consider making a magic carpet project

Russia is next at 3pm. We read Russia ABCs: A Book About the People and Places of Russia and made these nesting egg dolls. 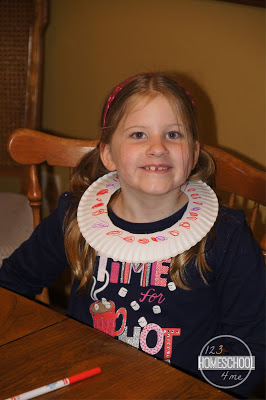 3:30 means it is new years in Kenya so we made these paper plate African necklaces and read Moja Means One 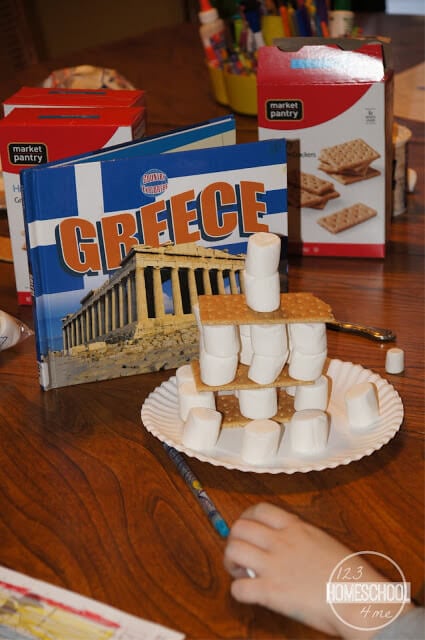 Moving along, it is 4pm and the new year in Greece! We made an edible Greek Parthenon with graham crackers, frosting, and marshmallows. 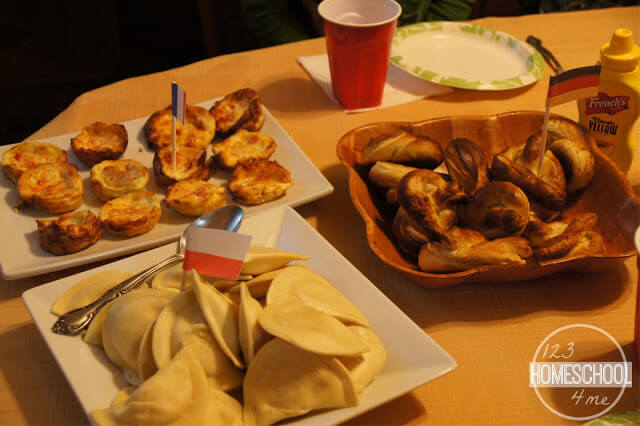 5pm means it is new years in Germany, France, Norway, Italy, Croatia and 38 more. We celebrated by having a very international dinner. Here was what we
ate:

It’s dessert time and as it is 6pm and new years in United Kingdom, Morocco, and parts of Spain we are going to have some traditional Spanish desserts for Christmas time – Turon and Polverones.  7pm means new years in parts of Portugal. To help the kids visualize the beautiful Azulejos tiles that adorn the walls of most buildings in Portugal they got to explore these 3D Art uzzles.

Brazil enters the new year at 8pm and to celebrate we read Amazon Rainforest book, watched the Magic School Bus In the Rainforest to learn more and made a Hand and Foot art Toucan. Or if you prefer you can make a Rainforest Diorama together using a shoe or pizza box and this Rainforest Animal Toob 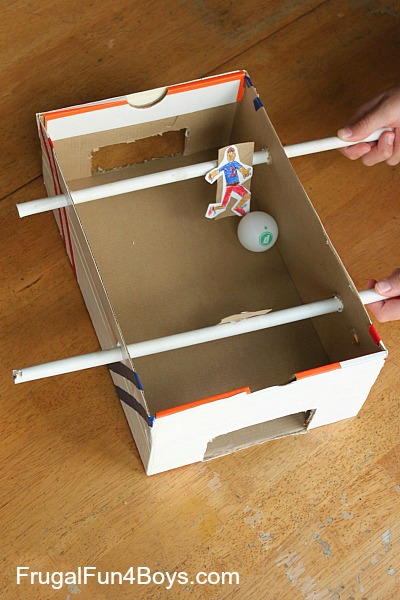 It’s getting late for kids, but we just had to stay up until we got to 9pm to see the New Year come in for Argentina, Chile, Uruguay, and Paraguay. As soccer
is a very popular sport in South America we made our out soccer foosball and had some fun playing too! (idea from Frugal Fun 4 Boys)

If the kids are still up by 9:30pm, Newfoundland, Canada just entered the New Year.  To celebrate we decided to have a 2nd dessert (it is New Year’s after
all) and have a traditional Canadian dessert – Beaver Tails.

Still up? 10pm is the new year in the Caribbean in please like Puerto Rico, Aruba, St. Marten. St. Kitts, and more. We often think of the Caribbean as a vacation spot. Spend some time remembering your past vacations – which one was everyone’s favorite & why? Where would you go on vacation next year if money/time was no object?

10:30 is New Years in Venezuela. Veneuzuela is know for oil. You can have some “oil” (aka hot cocoa) to drink, or break a pinata (they use pinata’s too, although normally at birthday parties)

We’re getting closer now, 11pm means the east coast of the United States is ringing in the new year and you can watch the ball drop in Times Square if you are ready to be done for the night….. which we were =)