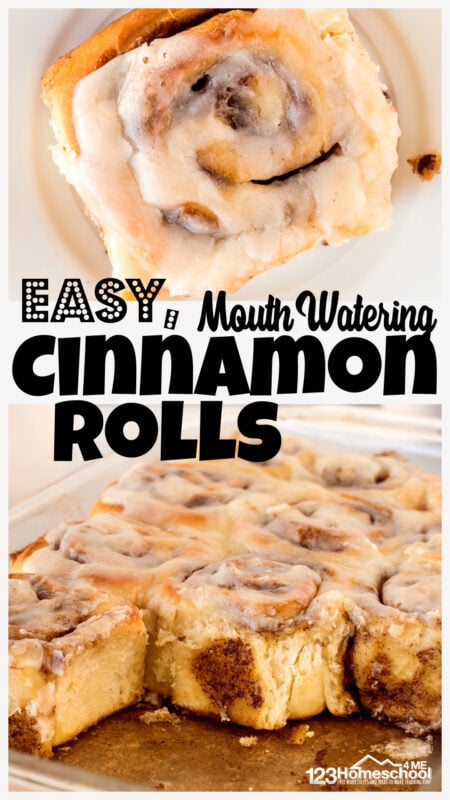 Not only are these cinnamon rolls the best cinnamon rolls you’ll ever taste, but they are super easy to make too.  This Copycat Cinnabon Cinnamon Rolls Recipe is easy to make, just needs some time to rise. PLUS ~ You can make them the day before and put them in the refrigerator overnight. They will take just 15-20 minutes the next morning and taste just like you wok up at 4am to slave over them.

This Amazing Cinnamon Rolls recipe is my most requested recipe both by my kids, their friends, and family members who’ve tried our family favorite breakfast recipe.  Honestly, I think this homemade cinnamon rolls recipe tastes even better than Cinnabon, Panera, or any that I’ve tried at a restaurant. Plus you can control the ingredients to make sure they are good quality. 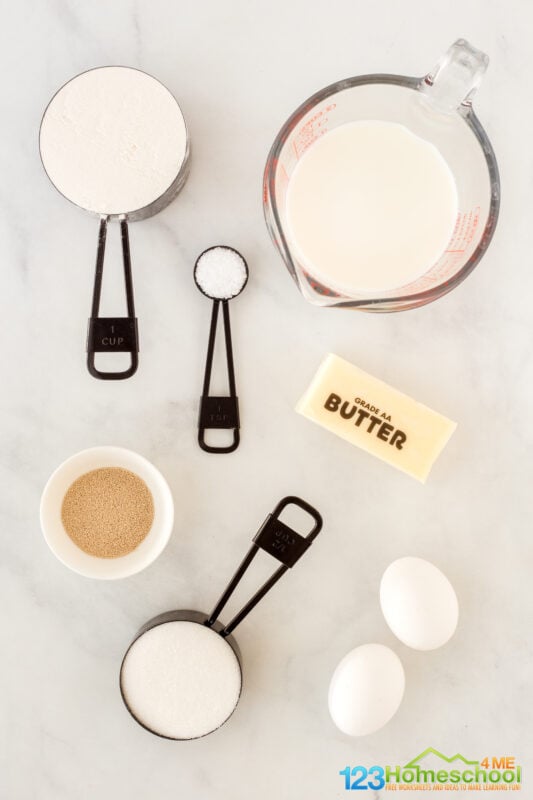 I’ll admit, one of my favorite parts of making these is that this easy cinnamon rolls recipe is so simple! Simply put all the following ingredients in your bread machine in the order recommended by your bread machine (we do wet followed by dry, ending with yeast). Let the breadmachine do all the work and then just roll out and TADA! You are instantly nominated for mom of the year and told you should open your own restaurant! 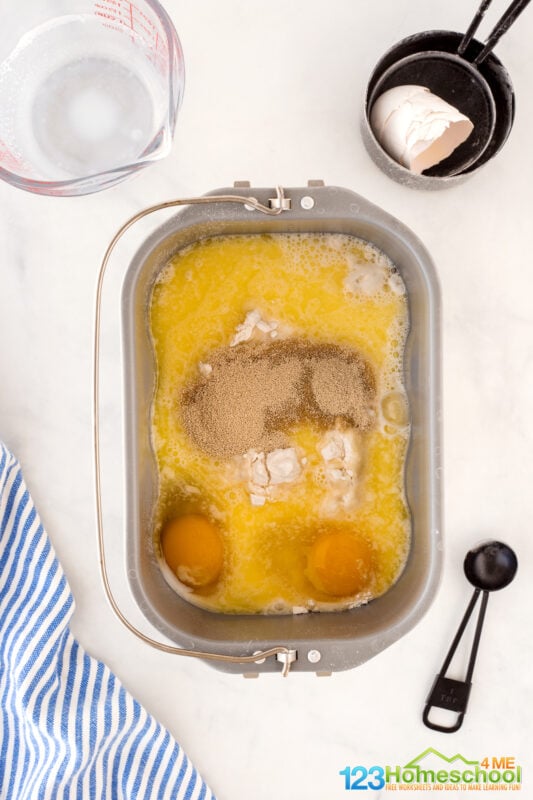 Set your bread machine for the dough cycle which will take about 90 minutes. 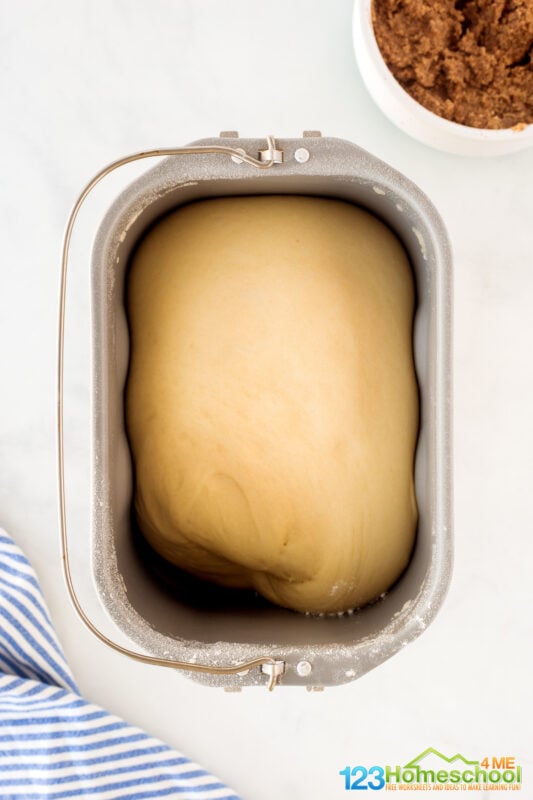 Put dough on a floured surface, cover with a towel, and allow to rest 10 minutes. 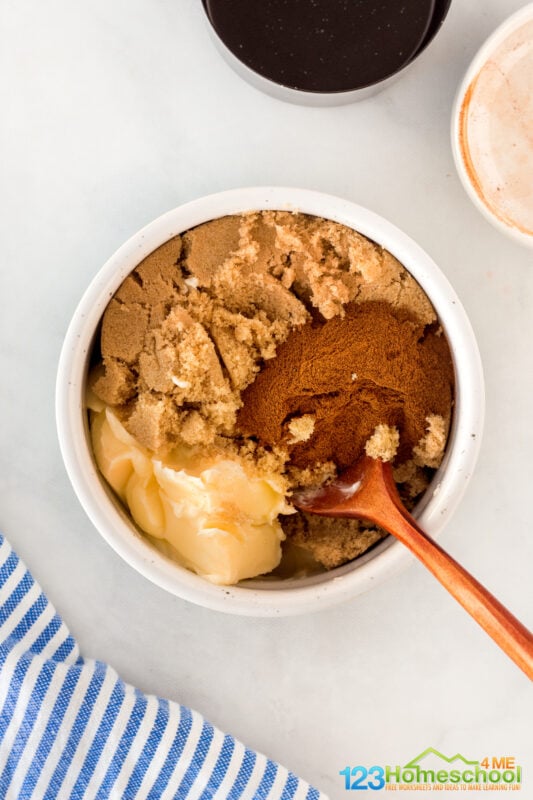 While the dough rests, mix together the filling: 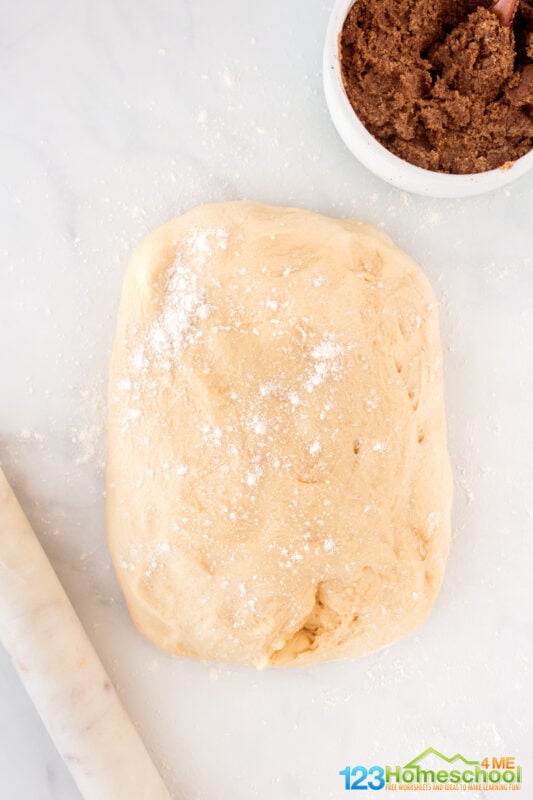 This dough comes out perfect. No kneading or re-rolling with this dough; it is literally perfect. 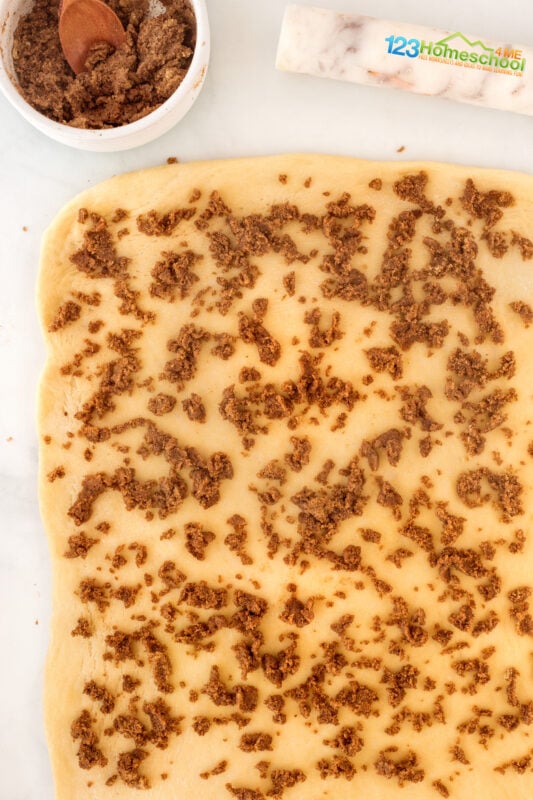 Roll out the dough until it is at least 12″ by 18”. You can roll it out bigger, it just means you will get more layers of filling in each of the cinnamon rolls. Sprinkle with cinnamon and brown sugar mixture. 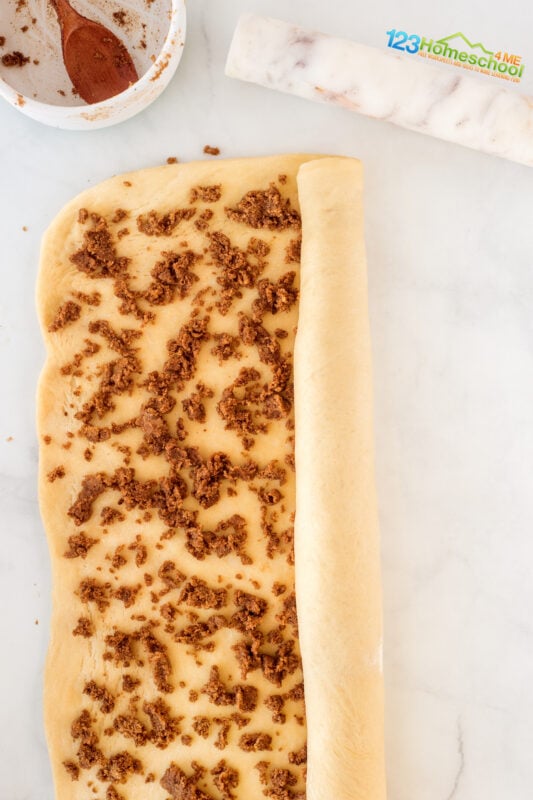 Roll up the dough carefully and tightly. 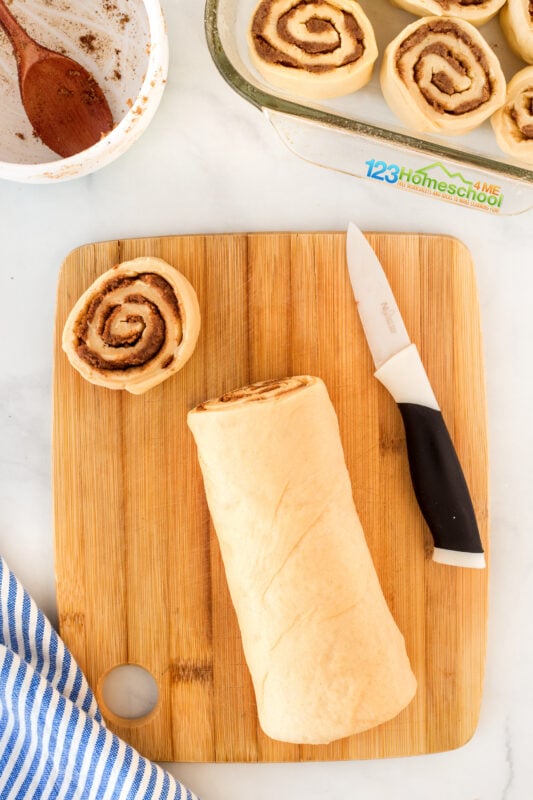 Hint: To make sure they are even start by cutting the log in half, then each half in half. Then each of these 4 sections gets cut into 3 pieces. 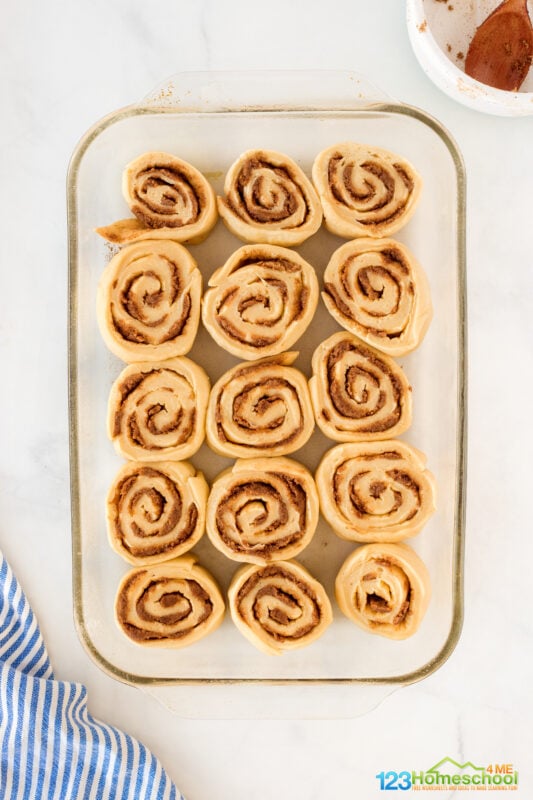 I recommend using a bread knife so that the dough will maintain it’s shape. Just be careful that you do it on a cutting board or don’t cut all the way down or it could damage your counter top.

At this point you can cover the pan and put it in the refrigerator and bake it tomorrow morning. It will taste exactly the same and will make the morning a breeze! 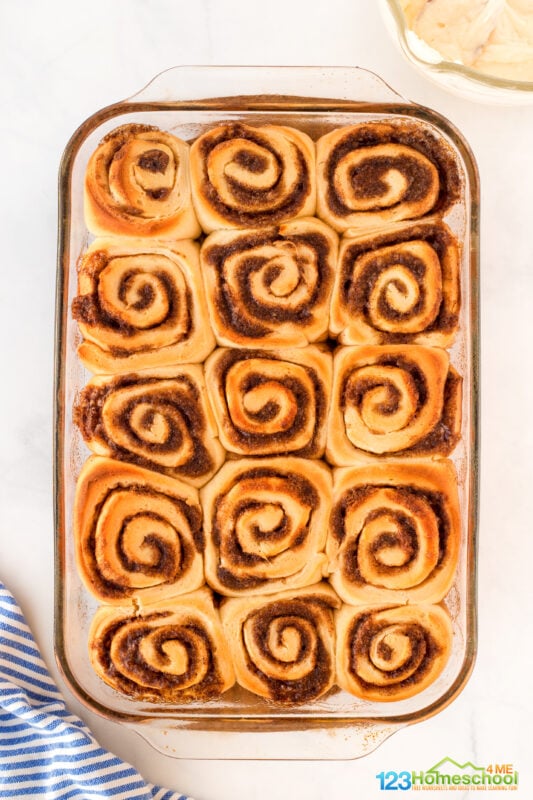 In the morning, cover the pan and allow the rolls to rest on top of the oven for 30 minutes while the oven preheats. Then bake at 400 F for 15 minutes. 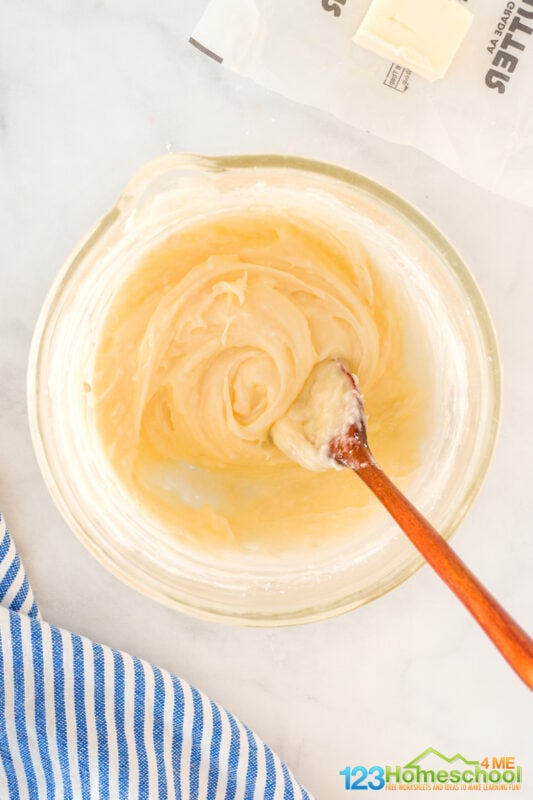 While the cinnamon rolls bake, whip up a batch of our favorite frosting. This is what makes this Copycat Cinnabon Cinnamon Rolls Recipe extra special. YUMMY! 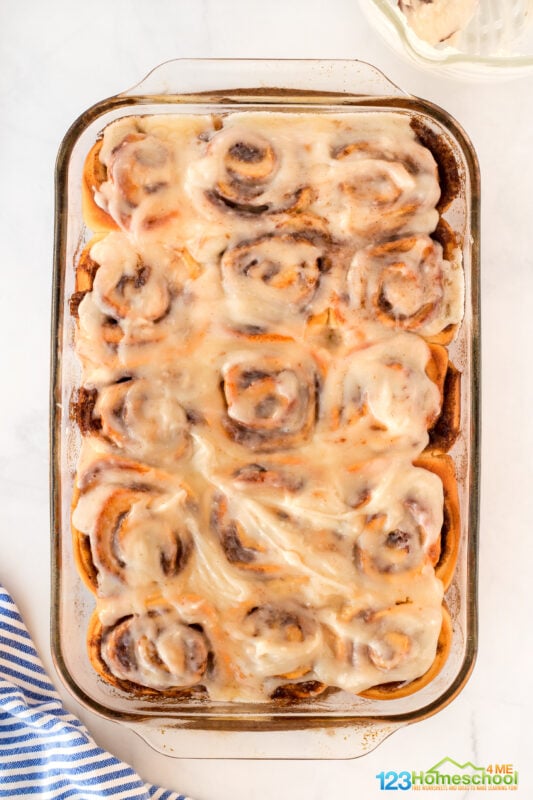 As soon as the cinnamon rolls come out of the oven spread the frosting on top. The heat will melt the frosting. YUM! 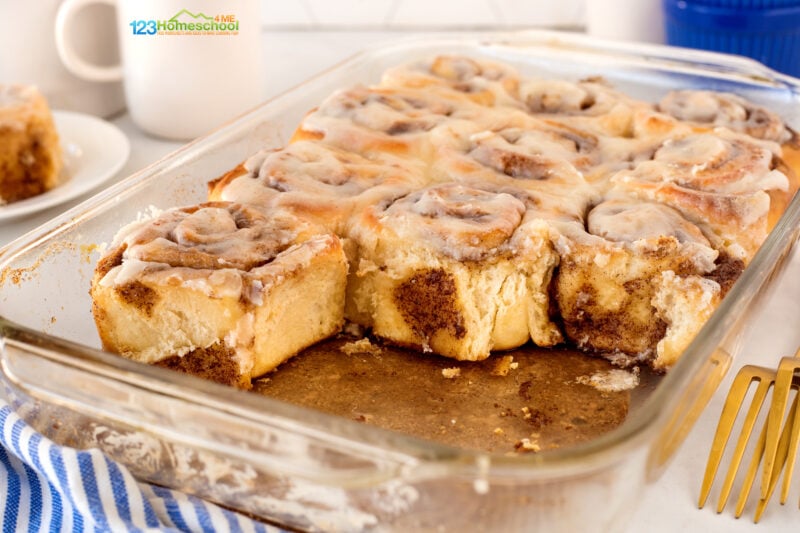 Here you have the best cinnamon roll you will ever taste! Way better than a Cinnabon. They are best eaten immediately. 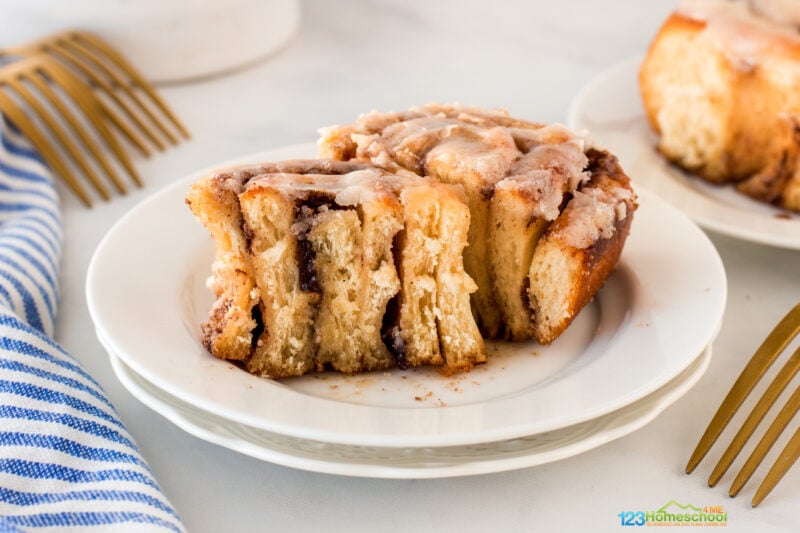 Although they take a little time, they are super easy to make and taste AMAZING! 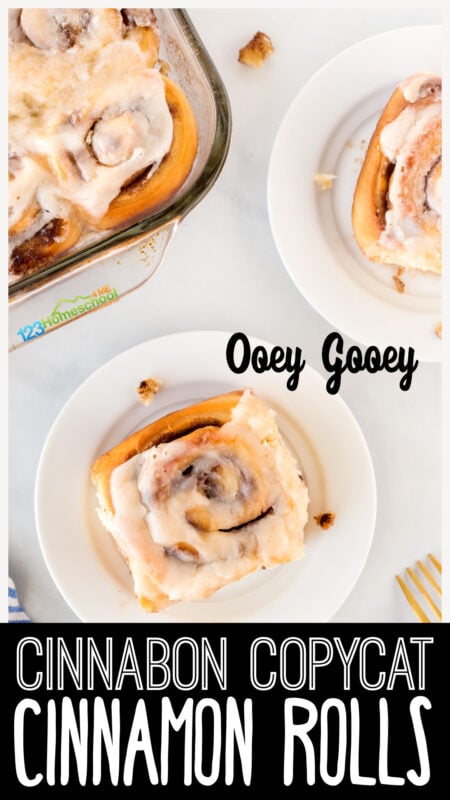 These are not only a favorite in our house, but requested by family spending the night and friends who have babies as breakfst for dinner. They rival Cinnabon cinnamon rolls, but are made with real ingredients with not artificial ingredients or preservatives. These are seriously THE BEST! 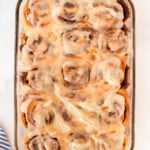 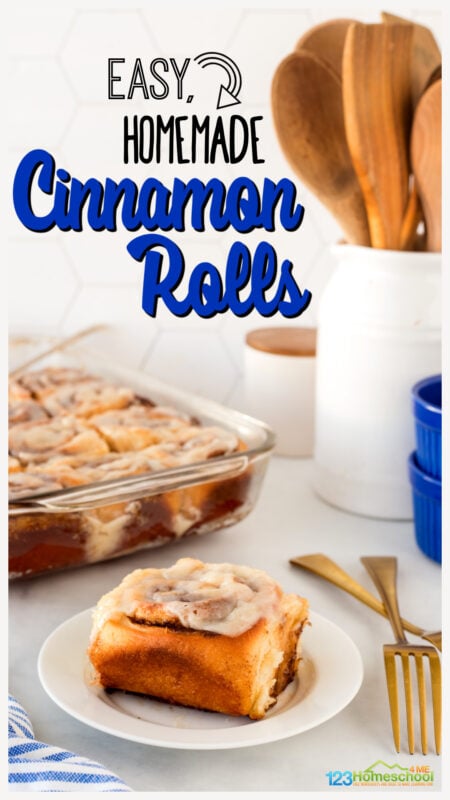