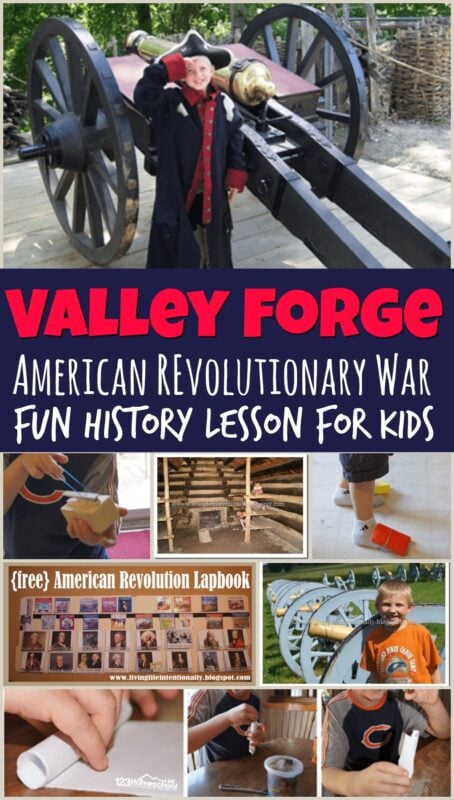 We did some fun hands on history projects like cold feet, dragon pistols, rolling cartridges, field trip to valley forge, leaned about Benedict Arnold, and finished our free American Revolution Lapbook. This has been such a fun history unit to explore together as a homeschooling family.

Each week we will add more dates to our timeline and learn about famous people from the American Revolution. You can do this unit without buying a single textbook (assuming you have a good local library)! Start by scrolling to the bottom of the post, under the terms of use, and click on the text link that says >> Download <<. The American revolution lapbook pdf file will open in a new window for you to save the freebie and print the template.

We watched episode 23 (The Hessians are Coming) to the end of the series ~#39 from the outstanding Liberty Kids video series. (If you have middle school+ age children you might want to check out The Founding of America Megaset) 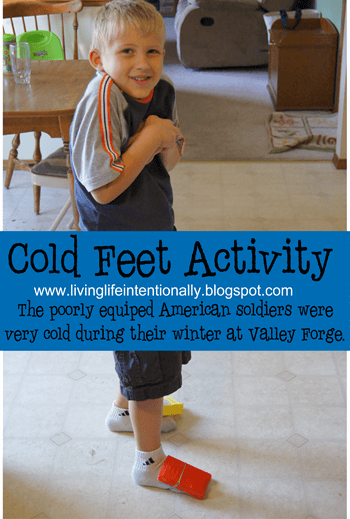 I wanted to make firecakes like the soldiers did, but didn’t get to it. Basically they mixed flour and water to make a dough. Then they put it on hot stones around the fire for something to eat. Not very good, but they were hungry and rations were limited! 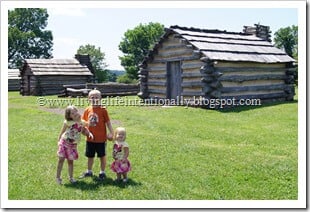 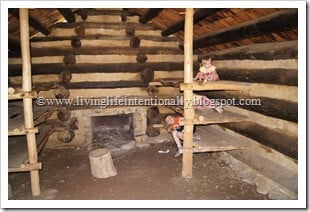 We took a “fieldtrip” to Valley Forge as part of our Revolutionary War Road trip (see post here). The men were in groups with others from their same company / state. Some states were better supplied than others. Some barely had enough food, blankets, and some were even missing shoes! It was very moving to see the type of shelter they built (looked very much like Lincoln Log homes) and watch the movie to get a feel for the conditions. 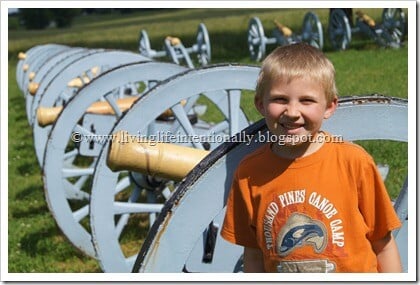 There were various canon’s left from their defenses that Goofy thought were VERY cool! At first I kept thinking wow these are still here from the beginning of our nation… then I kept thinking how young of a nation we are (200+) and how much things had change in 200 years! I wonder what 200 more years will bring…. 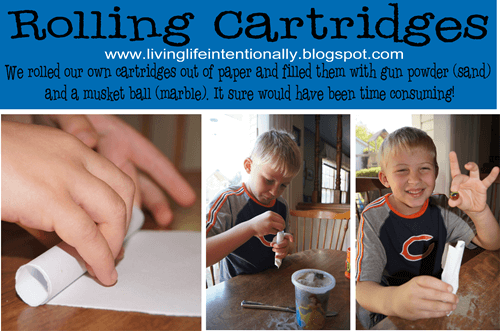 I first found the idea of rolling cartridges in the Konos American Revolution Activity Book. I love having lots of hands on activities to help make history come alive! We rolled our own cartridges out of paper and filled them with our gun powder (sand) and a musket ball (marble). After rolling several we had an idea of how time consuming this task was for the soldiers.

We made our own Dragon Pistols (I saw the idea at Squidoo here) using a scrap piece of wood that we super glued a clothespin on. The ammunition was rubber bands. It actually works very well & continues to be a BIG hit. Another option would be to make muskets using Let’s be Early Settlers with Daniel Boon by Peggy Parish

Benedict Arnold was a general during the American Revolutionary War who originally fought for the American Continental Army but defected to the British Army. While fighting for America, he obtained command of the fort at West Point, New York, and plotted to surrender it to the British forces. After the plot was exposed in 1780 he served the British Army as a brigadier general.

Lord Charles Cornwallis-was a British Army officer and colonial administrator. In the United States and the United Kingdom he is best remembered as one of the leading British generals in the American War of Independence. His surrender in 1781 to a combined American and French force at the Siege of Yorktown ended significant hostilities in North America.

(in various other books suggested under timeline)

John Paul Jones was a Scottish sailor and the United States’ first well-known naval fighter in the American Revolutionary War. Although he made enemies among America’s political elites, his actions in British waters during the Revolution earned him an international reputation which persists to this day. “I have not yet begun to fight.”

Women in the war

NOTE: Sometimes we skim through these books. I cannot guarantee the books in their entirety as we only uses parts or look at pictures. So forgive me if there is something in these recommendations that I don’t see =-) 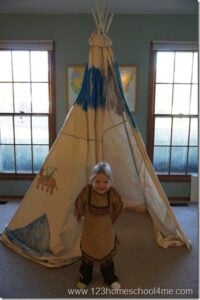 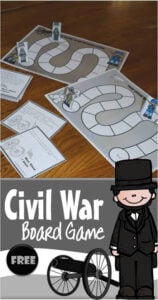 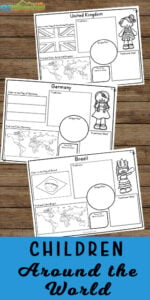