Today in last post in our Backyard Chickens 101 series . Today I’m sharing how our chickens did in the winter and little tips and tricks we’ve learned not that we’ve had chickens for a whole year. 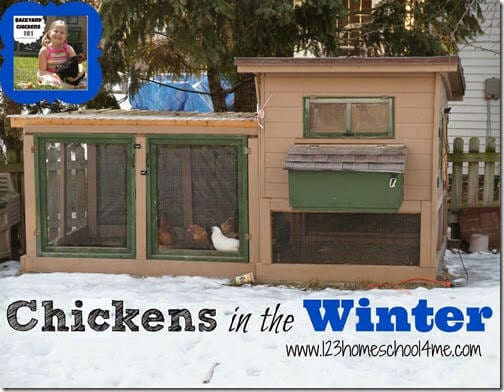 Backyard Chickens in the Winter Tips

Well our chickens have made it through one tough Midwest winter – and they are fine!

I had read that many chickens would get frostbite on their comb and wattle (which wouldn’t ultimately harm the chickens, but would turn black and look ugly). I am happy to report no frostbite for our chickens. The coop kept a nice, draft free environment for our chickens.

One thing that did catch us off guard was that chicken production started dropping in early September, as the days were getting shorter. We had two choices – allow the chickens to stop laying over the winter which would give them a break and would extend their laying years (as chickens lay until their eggs are gone – they can lay them year round or take a break in the winter and the total number of eggs laid remains the same) or supplement with some light to get year round laying. Since need eggs in the winter too, we opted to supplement with light.  It was very simple, actually. We ran an extension cord from an outdoor outlet to the chicken coop and used the heat lamp from when the chickens were young. We had it on a timer to give the chickens 16 hours of light a day – the optimal amount.
We’d heard that you should add all the time in the morning or they might get confused and not know when to roost and then with the abrupt loss of light would “freak out”.  But my husband was nervous with the light in the coop and stories of fire. So we had it go on at 5am (when I get up) and off at 9pm (just before we go upstairs). That way if there was a problem, we had not problem with electricity in the coop, we could attend to it quickly.

The added “daylight” did increase their egg production, but it was not as high as it is during the summer. There’s just no subbing natural lighting.
Note: If you sub lighting and then turn it off, go without power, or just skip a day for some reason the chickens inner clock will think it is fall an time to molt. They may start molting in the winter which would be bad for them as they’d loose that layer to protect them during the cold months.

Chicken Water Freezing in the Winter

Something you need to be aware of is that the chicken’s water will freeze during the cold winter months. Chickens must have access to water daily. You can either change the water daily like we ended up doing or getting a water heater. We got one only to realize it only worked with the huge galvanized watering font – great for the summer, but I didn’t have any faucet in the winter that was high enough to fill it. Short of taking pitcher after pitcher out (no thanks!) it wasn’t going to work.

Here was our routine. I went out in the morning to open the run door. If it was cold they would hurry down to eat food (we moved their food outside during the winter to make more room in the coop) and within 5-10 minutes were back up in the warmer coop. Note: Supplementing scratch and kitchen scraps will help the chickens during the winter. When they all went down I would grab the bucket of water (frozen) from the previous day. I would then set it in our house on a mat and wait for it to thaw (at least slightly). Once I could dump it out, or let it thaw completely and return outside, refill it, and take it back out to the chickens by lunch time.

Chicken Eggs Freezing in the Winter

It gets cold in the Midwest during winter. Especially this winter! Since we had our chickens lay through the winter we had to be extra vigilant to go get the eggs out of the coop before they froze. We learned that as the chickens kept making trips in the nesting box the next hen would keep the previous laid eggs warm while she laid. So the eggs were kept warm until early afternoon. We always gathered eggs by lunch or early afternoon and again when we closed up the run door for the night. With this system we only had 3 eggs freeze. Frozen eggs  will have a crack as the whit expands it needs room to grow. You want to remove them from the coop before they thaw or they might smell AND the chickens may try to eat them out of boredom and they just may discover they like the way they taste!

I hate to be the bearer of bad news, but chickens poop. They poop a lot! And it doesn’t stop in the winter, although the fact that it freezes may slow you down from having to deal with it. The majority of our poop 80%) was under the roosting bar. So it ended up looking like a mountain. But it froze so it was impossible to deal with. Luckily, frozen poop doesn’t smell and since it was contained to just one area we just let it be. When the weather warmed up  we quickly got out the poop so it wouldn’t smell or be a sanitary issue for the chickens.

We’ve had our chickens over a year now. Here are some things we’ve learned.

I had done the research and knew chickens ate less with pellets. It’s just less “fun” to eat. But it wasn’t an option at our feed store until late this fall. When we switched the chickens did turn up their proverbial nose to it. We supplemented with some vegetable and fruit scraps to just get through the transition. Within a week or so they began getting use to it. It has cut our feed bill in half! I highly recommend pellet chicken food.

We Added a Roof to the Run!

Whenever the run sand got wet, it smelled. Since we live on less than a quarter acre in a suburban neighborhood that was not a good thing.  So we tried various things and the most effective was adding a roof. It was a simple clear (to allow sunlight) corrugated roof that my husband just screwed into our existing structure. It has been a great addition!
The other advantage of a roof is that now, even in the rain or snow, the chickens will venture out side to get some fresh air and have more space to move around.  A good thing when you want to keep pecking at one another from boredom out of the equation.

I knew chickens pooped before we got them. But I had no idea the amount of poop! I’ve already addressed how and when to clean up their poop earlier in the season. I just want to stress that you need a Plan A and a Plan B for what to do with the poop. Poop does take 6-12 months to thoroughly compost – so plan accordingly!

Hens Picking on Each Other

If chickens are bored they will pick on each other. Make sure you provide food to peck at, enough space per chicken, and some things to stimulate them or they just might start pecking at one another. Pecking doesn’t sound that bad at first. But if they peck enough at the chicken lowest on the pecking order she will loose feathers (we noticed this especially on the bottom) and if they draw blood – the red will attract them to keep pecking. I’ve read that chickens will peck one another to death if they see red and will consume some of the other chickens. So if you don’t want cannibal chickens (yikes!) then follow those simple proactive techniques. If you do notice a situation (like we had) you need to be on top of it. There are medications you can use to disguise the area, but we didn’t want to dose our organic hens. When it got bad enough we humanely butchered her.  Note: If you have enough room you could just separate the hen until she feathers out again and then gently introduce her slowly back into the flock.

We are Predator Proof

I am happy to report that our measures with the hardware cloth along the bottom and all exposed windows and walls had proved to be excellent at preventing predators. Throughout the winter I noticed various tracks including raccoons around the coop. But none could get in! Yeah!

I know wood swells in the summer and more so in the winter but I guess I never thought out that being the case with the coop. There were times it took me a long time to get doors closed and I was starting to get worried they wouldn’t open or close at all. Just make sure if you have a stubborn sliding door that you take care of sanding it down before winter.

So what tips and tricks do you have for us? Do you have any questions?