If you are looking for some really fun ideas for an amazing star wars birthday or star wars games for May 4th Star Wars Day, you have to check this out! This is the party themes  we did for my sons 10th birthday.

No matter what theme you choose, here are 20 Ways to Make Birthdays Extra Special.

It seems like every kids has a star wars birthday theme at some point. I mean it’s a classic! Here are lots of fun Star Wars themed food, homemade Star Wars cake, and lots of Star Wars games for kids of all ages. 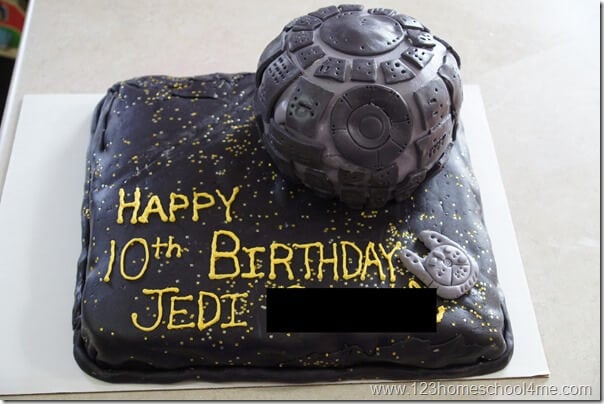 I was super excited about the star wars birthday cake I came up with this year! I made two 9×13 cakes to put side by side for the base. These were covered with my homemade buttercream frosting and marshmallow fondant which I used black food coloring with edible glitter rolled into it.  It looked so cool! (the millennium falcon is also made out of homemade marshmallow fondant)

Hint: You will also want to make sure you have a cake board! 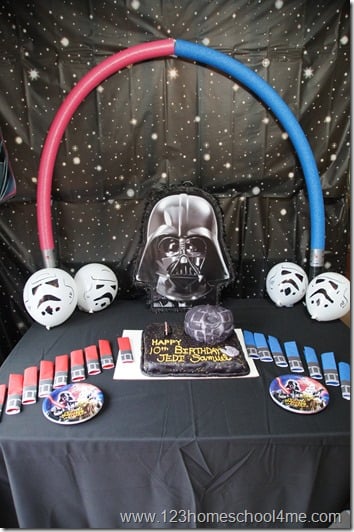 We put the cake on our party table.We used a black table cloth and this backdrop for effect.  We converted pool noodles into light sabers with duct tape, used black sharpies to draw on the storm trooper faces on white balloons, and made light saber napkins along with these star wars plates.

Our star wars birthday party games were a big hit! 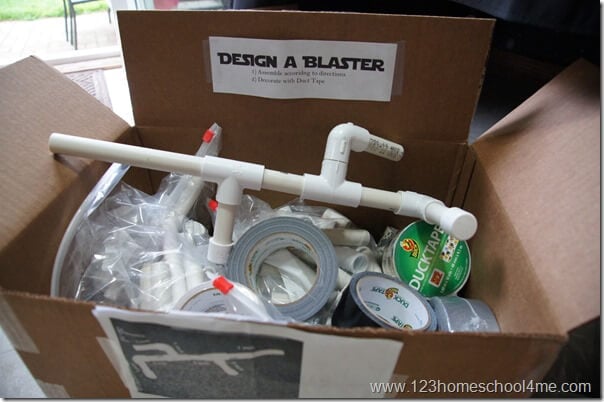 First, we had kids build their own blaster “aka marshmallow shooter” out of pvc pipe. It was pre-cut and they could assemble it anyway they liked. Then we had various colors of duct tape for kids to decorate their weapons. Each kid got a bag of mini marshmallows for ammunition. 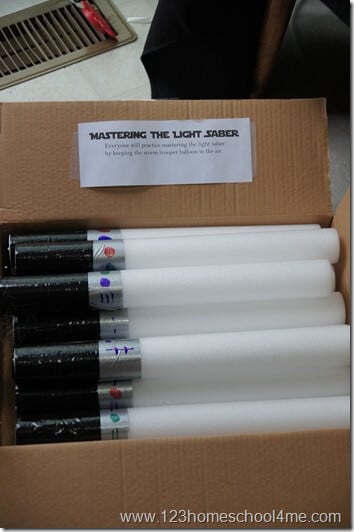 Then we gave each of the Jedi’s their own light saber. I made these using these light up party sticks (picture a pool noodle that lights up / various modes to choose from) with a duct tape handle. 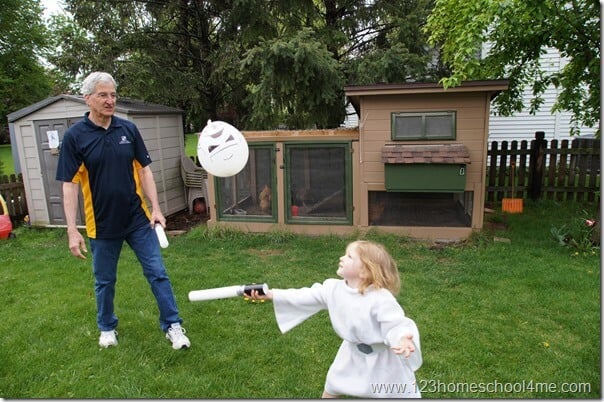 The young Jedi practiced using their light saber in some drills including keeping the storm trooper balloons in the air.

Then the kids all had to run the obstacle course as part of our Jedi training academy. Before they began we gave them each a robe (brown pillow case we cut out a spot for their heads and arms; plus we gave them a rope for their waste. These were so cute! 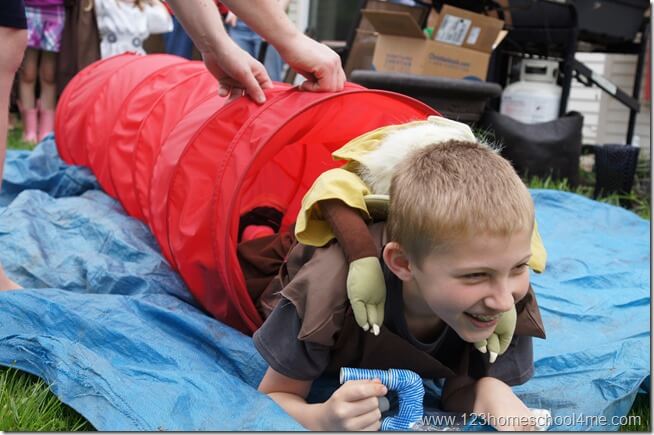 For the first part each child had to army crawl through the tunnel with the Yoda backpack on their back. 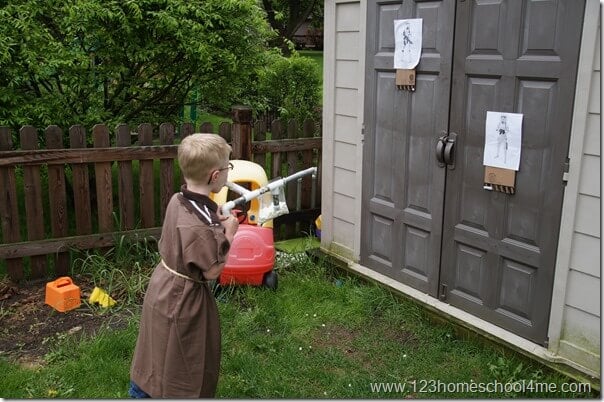 Next the kids used the blasters they made to shoot the storm troopers and other villains lurking about. 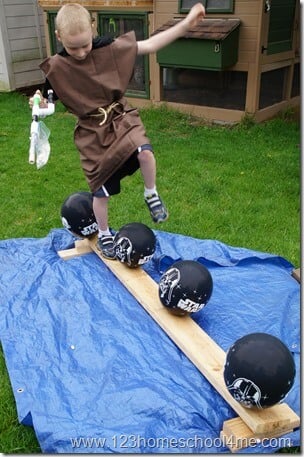 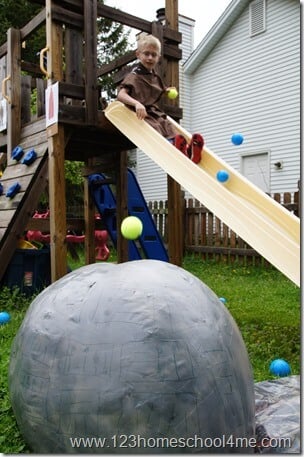 The kids then went over a board dodging the Darth Vadar balloons as they went. Finally they had to climb up the wall and shoot down the tunnel while trying to get the photon torpedo (tennis ball) in the Paper Mache death star. 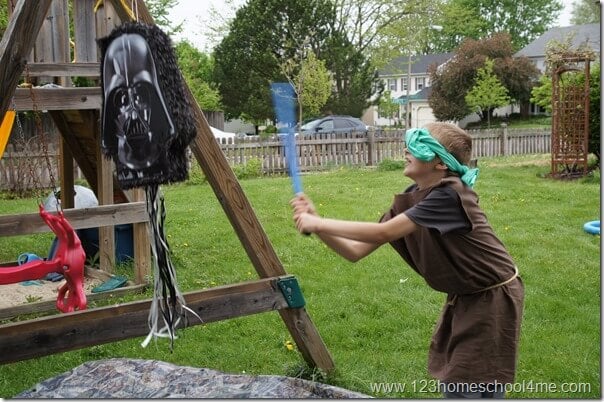 And what would a party be with out a Darth Vadar Piñata! 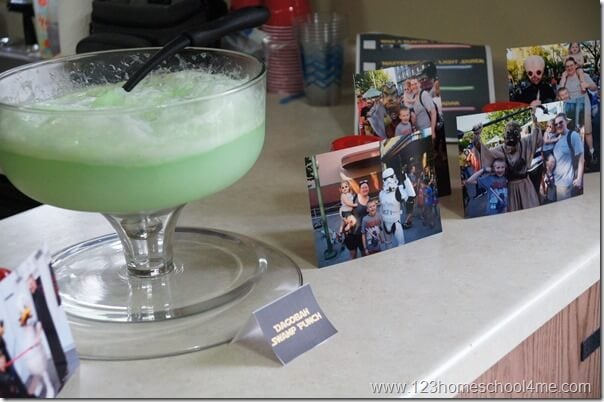 For the friends we just served Dagobah Swamp Punch and birthday cake. 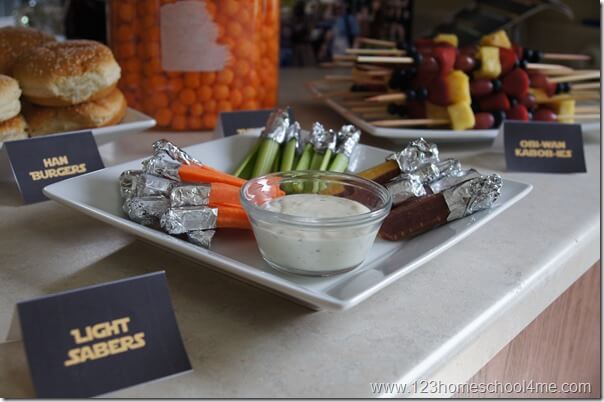 Once the party ended, family stayed for lunch. We had: