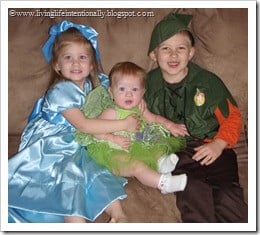 This week we decided to have a Peter Pan week since the kids were all dressing up as characters from the classic Disney movie. We had so much fun!

Greater Than, Less Than Worksheets

I made some FREE PRINTABLES to help Goofy understand Larger than & Smaller than. He had a lot of fun with them, loved the crocodile as the symbol, and caught on quickly!

Clipart purchased and use with permission from Funky Mushrooms Designs 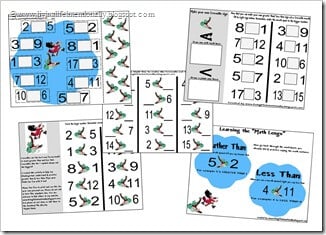 We did a slew of fun, educational worksheets with the cutest Peter Pan clipart!  My kid LOVED the Peter Pan Preschool Pack from Homeschool Creations!  This may have been our favorite so far with letter tracing, pre-writing skills, which one is different, find all the “Hh”s, shapes, measuring Big Ben, beginning sound clip-on, number puzzle, rhyming, patterns, graphing, and so much more! 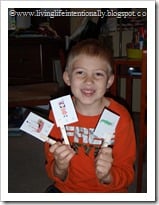 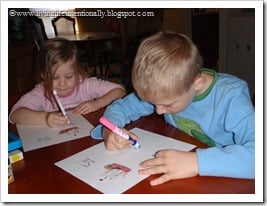 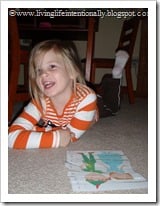 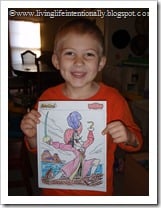 I created Tick Tock Clock as a fun Peter Pan themed Game that would help teach & reinforce telling time. I’ve included it here as a FREE PRINTABLE! There are 15 clocks (each with a different time & character from the Disney movie Peter Pan), one crocodile (watch out!), and a start/end spot. The inserts for the photo stacking cube include: three go 1 space, go 2 spaces, Captain Hook go back 2, and a go to the Crocodile spot. I hope you enjoy it even half as much as my kids did! If anyone wants an add-on pack with more times, just leave me a note in the comments section. 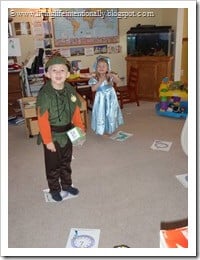 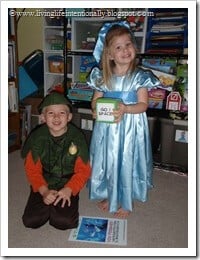 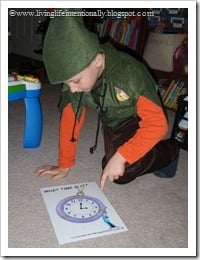 I originally created Tick Tock Clock to be played by rolling a photo cube dice with inserts included in the free printable. But here is another fun way to play! We played it with Peter Pan music and moved around the ‘game board.’ When I stopped the music they needed to tell me what time the clock said they were standing on. For Goofy (6) it was just practice, but for Minnie (3) it was making learning fun! This video is from the end of the first day, by the end of the week Minnie was a pro! Tinkerbell just enjoyed watching the excitement around her. Take a peak… 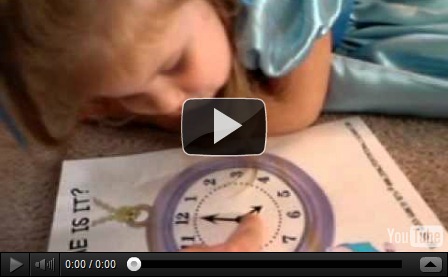 We made Big Ben (the famous London clock in the Peter Pan movie) and practiced working with a clock some more. I would tell Goofy a time and he would move the hands to make Big Ben reflect the correct time. The face of the clock is from a clock activity in Homeschool Creations Peter Pan Preschool Kit. For the clock I used an empty linguini pasta box, wrapped in brown construction paper. I used black cardstock to make the hands and a bard to attach them in such a way that they would move. The top of big ben I made from black cardstock.  It is a prized project he now keeps in her room! 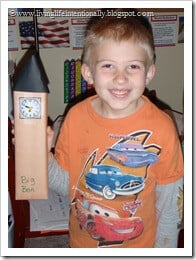