Here are lots of fun, interactive ideas for reviewing the Old Testament Bible with Kids. 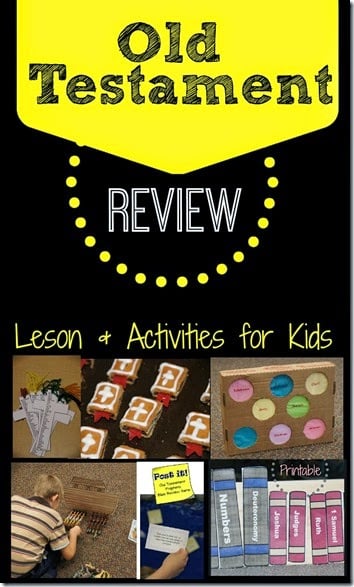 As our Sunday School year kicked off we started off with this Old Testament Review Lesson for Kids to remember what we had done the last 2 years. Here are some of the fun, hands on ways we reviewed 4000 years of Bible history. 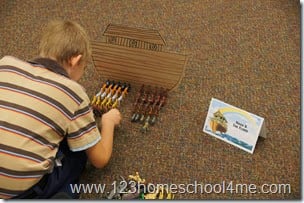 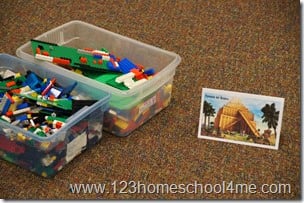 As the kids came in they were able to jump right in and explore one of 6 hands on stations we had set-up all over the room. Note I had signs next to each station with a picture and words to describe what they were doing so the kids made the Bible connection. 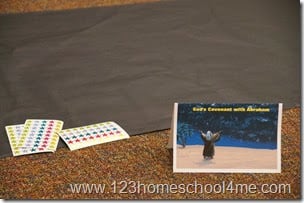 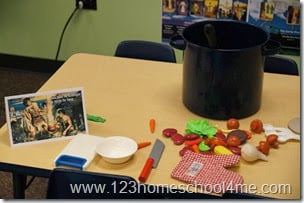 Then we continued going through history as we taught the review lesson. We mixed in singing and movement to keep their attention as we worked through 4000 years of history!

Moses was born when the Israelites were slaves in Egypt and the Pharoah had declared that all baby boys were to be killed. Moses’ mother put him in a basket and put him on the Nile where God allowed Pharaoh’s daughter to find him; she raised him as her own. God called Moses and told him to go to Pharoah to tell him to let God’s people go. God used 10 plagues to convince Pharoah to let them go.

Israelites walked in the dessert for 40 years. During that time God gave them the 10 Commandments through Moses, he provided Manna for them to eat, still God’s people grumbled and disobeyed him. So God said none of them would live to see the promised land. Sing  10 Commandment Boogie Song
Tabernacle was built so the people could worship God. There were certain rules they needed to follow. (we quickly showed an illustration of the tabernacle)

12 men went to spy on Canaan

We watched this you tube video  that did a great job of explaining and helping the kids to visualize. You may also want to sing 12 Men Went to Spy on Canaan Song.

Moses dies and Joshua was put in charge. Now when they got to Jericho with big walls he didn’t know how he’d get in “Do not be terrified; do not be discouraged, for the Lord your God will be with you wherever you go.” (Joshua 1:9)
Activity: Have group stand in circle and pick volunteers to be Israelites. Have volunteer “priests” march around the circle while you count to 6 symbolizing the 6 days. Then walk around one final time for the 7th days and have the “priests: blow their horns as they march. Then on the count of 3 everyone shout and have the [human circle] wall fall down.

The Judges helped rule and guide Israel during this time.

The Israelites turned from God being their sole leader and wanting a king like all the neighboring kingdoms. Although God knew it wasn’t best, he gave them what they asked for. The first king was Saul and he repeatedly disobeyed God, God rejected Saul and choose a new King for Israel. He choose an unlikely candidate, a shepherd boy named David. (Psalm 51:10) We talked about how David fought Goliath.

Activity: Pick a volunteer to be David and have them use a rubber band to sling shot a marshmallow at the Bible leader. We had the Bible teacher wear safety goggles for added affect.
After David, Solomon became king. He pleased God and God granted his request of wisdom. But like all earthly kings, he struggled and was tangled up in sin. Solomon’s downfall was his many (foreign) wives and he succumbed to worshipping their gods and he lost his way.

God’s Kingdom is Divided in Two

God punished Solomon’s sin by dividing the kingdom into two. Both the Northern Kingdom (Israel) and the Sothern Kingdom (Judah) had lots of evil kings.
Activity: Walk down the middle of the group “dividing” them into 2 (northern & southern). NOTE: When we did our year end review we did Punch it! – Kings of Israel & Judah Activity
Now there were a lot of Kings, and most were not good Kings. We gave random kids post it notes and they brought them up and put them on the “good king” or “bad king” side of both Judah & Israel.
Kings of Judah (20) – below is a sampling

Despite each kingdom’s struggles with sin, God provided prophets to draw his people back to Him. We began by talking about the prophet Elijah who confronted Ahab for idol worship. They had a showdown on Mt. Carmel where they both offered burnt offerings. Baal was a false God and never showed up despite them singing and shouting all day. Elijah prayed to the true God who immediately sent down fire to consume a water drenched sacrifice. Show a Picture
Then we talked about more than a dozen major and minor prophets.

Activity: We had the kids pop up with a sign of their name while you read a short description of what they did?  [if you have time sing this fun version of Jonah In the Belly of the Whale] NOTE: In our year end review we did the Post it! Old Testament Prophet Review Game

After many years of prophets warning the people of coming judgment, Israel and Judah were conquered by their enemies and taken off in captivity….