Harnessing the power of electricity is truly one of mankind’s greatest achievements. From indoor lighting to smartphones, being able to use electrical energy to our advantage has completely changed the course of human history. This educational science activity provides kids with a simple, inexpensive way to create their own homemade batteries using materials that are likely already in their home (pennies, aluminum foil, paper towels, vinegar, and duct tape). With an inexpensive LED, kids can use their homemade batteries to power a useful device and feel some of the excitement that early inventors must have felt over two hundred years ago.

Electricity is a form of energy that comes from charged particles.

In nearly all electrical devices, negatively charged particles called electrons flow along a wire to create a current which is used to power the device. A wire that is not connected to a power source has no reason to create an electrical current. When batteries are connected within a circuit, electrons want to flow from the negative electrode (called the anode) to the positive electrode (called the cathode) creating the current that will power the load.

Within a battery, a separator is placed between anode and cathode to keep the electrons from flowing directly from one electrode to the other, forcing the electrons to flow along the external wire and power our devices. Another substance, called an electrolyte, is also placed between the anode and cathode. The electrolyte promotes the chemical reactions which will cause the anode to become negatively charged and the cathode to become positively charged. In this simple homemade experiment the anode is the aluminum foil, the cathode is the penny, the separator is the paper towel, and the electrolyte is the vinegar. 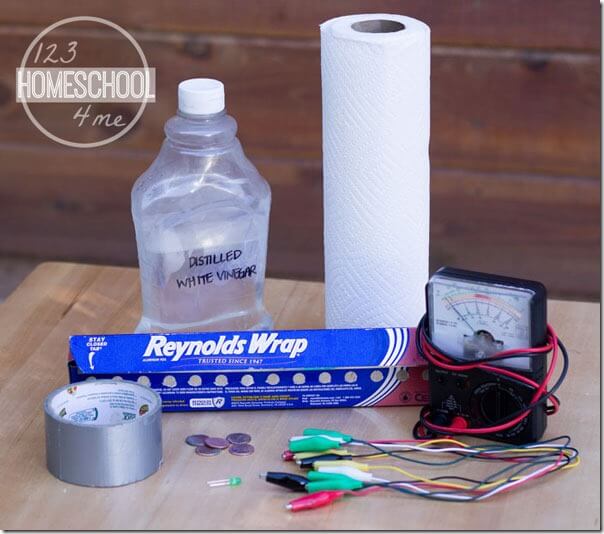 To make your homemade battery, first tear a square piece of aluminum foil about 3 inches (8 cm) per side. Exact dimensions are not important. 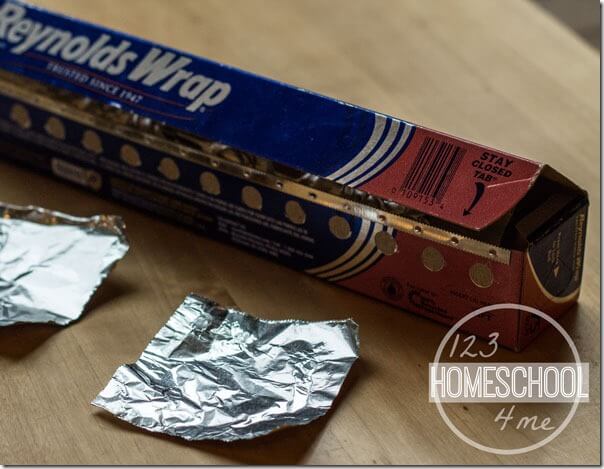 Fold the aluminum foil into a square about 1 inch (2.5 cm) on each side. Again, exact size is not important, but the square piece of aluminum foil should be a little bigger than a penny. 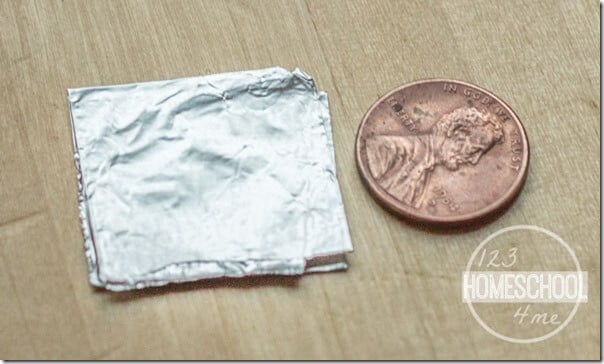 Rip a piece of paper towel about the same size as the aluminum foil and fold it into a similarly sized square. 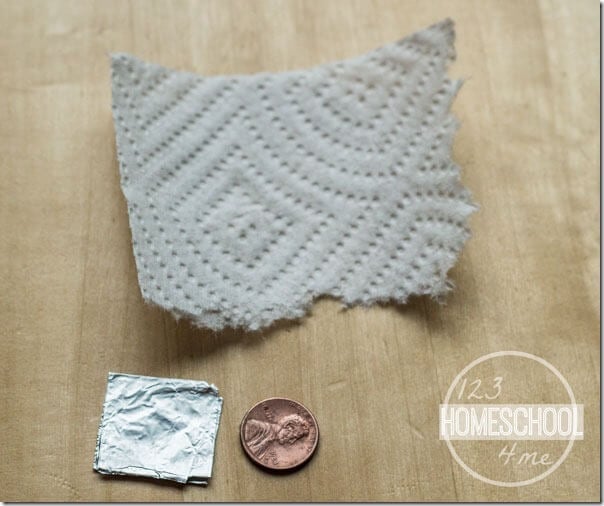 Next, rip a piece of duct tape that is about the same width as the paper towel (or slightly bigger). 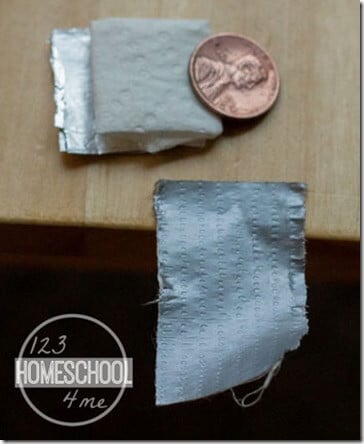 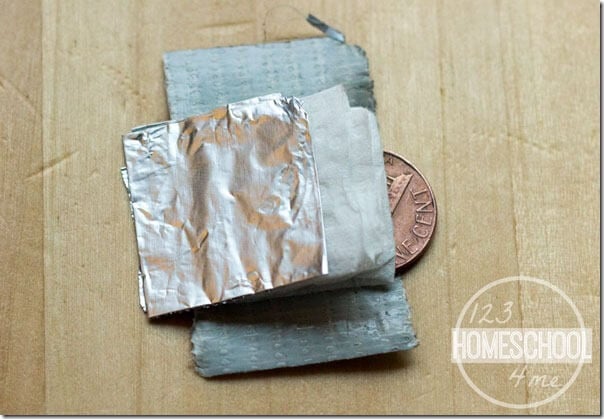 Fold over the duct tape to hold the 3 layers together to make your DIY Battery. The front and back of your battery should look like this:

Finally, add a few drops of vinegar to the paper towel to act as the electrolyte. Your battery is complete.

If you have a voltmeter, connect the positive, red lead to the copper penny and the negative, black lead to the aluminum foil. Turn the dial to the lowest voltage setting. Your battery should measure in the vicinity of half a volt. 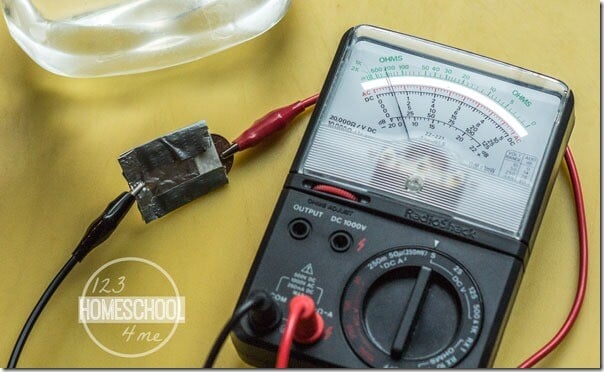 If you would like to light up an LED, you will need to make about 5 batteries. Depending on your particular LED, you may need more or fewer. 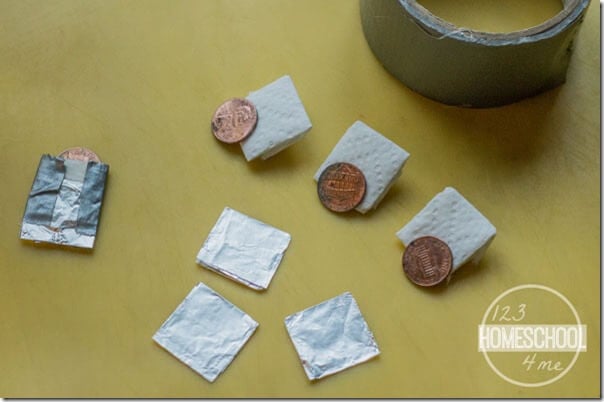 Connect your batteries in series by attaching the penny of one battery to the aluminum foil of the next with duct tape. 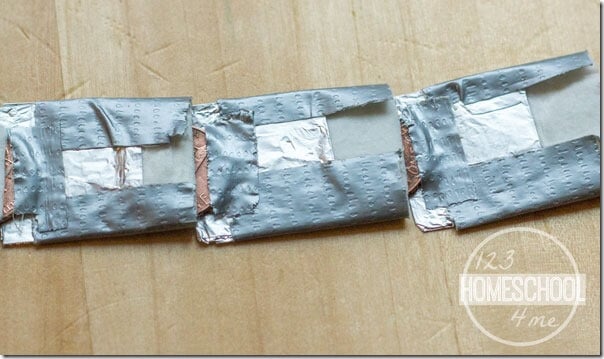 You can use your hands or some other heavy object (like a banana) to make sure all connections are firmly in place. 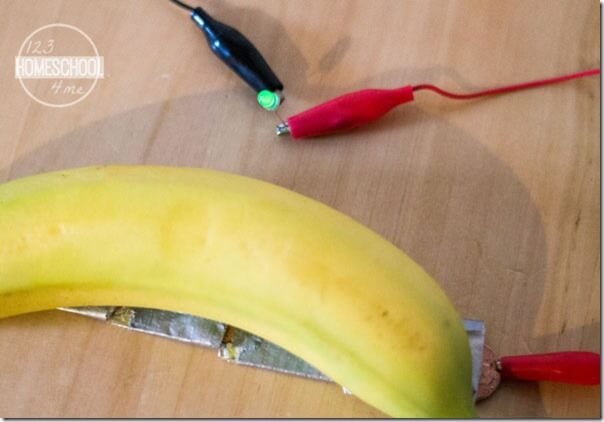 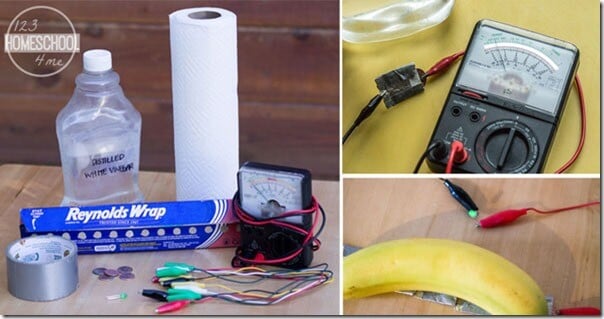