Thinking about celebrating Halloween at the happiest place on earth? Here is a thorough review of Mickey’s Halloween Party in Disneyland California. Now you know where to get candy, where to see characters, what the halloween parade is like and more! You are ready for your next family vacation. 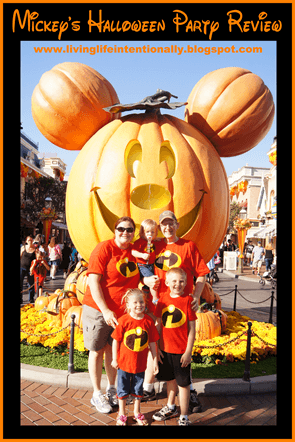 This year we (The Incredibles) attended Mickey’s Halloween Party in Disneyland, California. The party runs select nights in October and requires an additional ticket. Although the party ran 6pm-11pm (at which time the park was only open to guests with these special tickets), the ticket allowed you to enter the park at 3pm to begin enjoying rides.  I suggest enjoying the rides from 3-6pm because there are so many other things you will want to do! Once you “finish” ride your favorites after the parade until closing!

Note: If you want a picture in front of the pumpkin like we did get it right away – the line gets long pretty quickly and only gets longer throughout the evening. 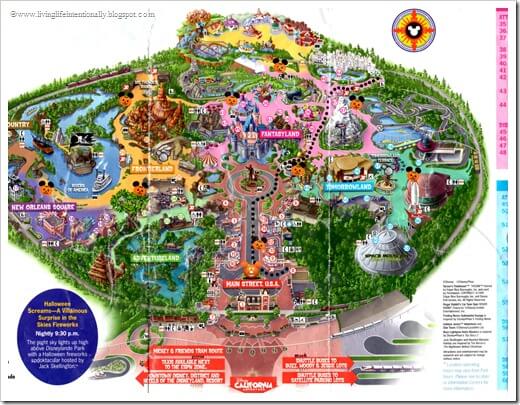 About 1/3 of the adults were wearing costumes when we went at the beginning of October and all the children. We decided to be the Incredibles. It was not hot or awkward like traditional costumes, it made it easy to find each other, it was fun, and we could wear them again =-) 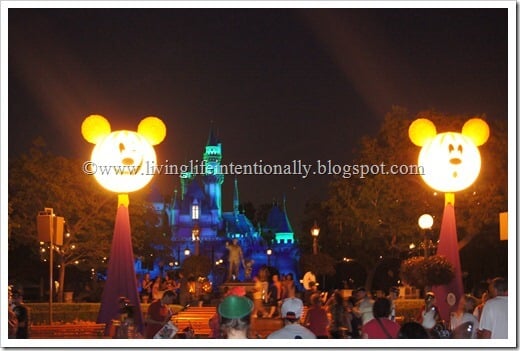 This truly is a family-friendly event. There are carved Mickey Pumpkins throughout the park and Mickey “ghosts” in addition to the beautiful standard night time lighting. You will also find the front of It’s a Small World decorated for the evening. 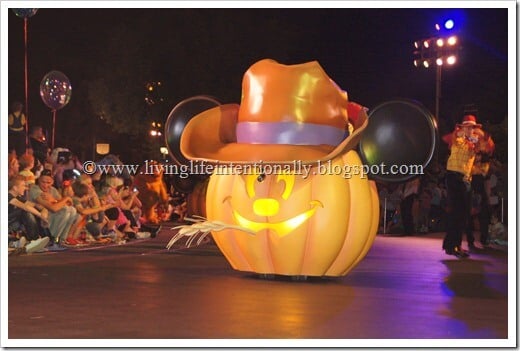 The parade runs twice (identical parade both times) and has happy music (This is Halloween….), characters in costume, fun carved pumpkins, and many favorite characters. You will not find any villains or other “darker” Halloween things in the parade. It truly was a “G” parade. The only thing that might bother more conservative folks at all is Minnie choose to dress as a witch – we choose to not see Minnie in that costume. 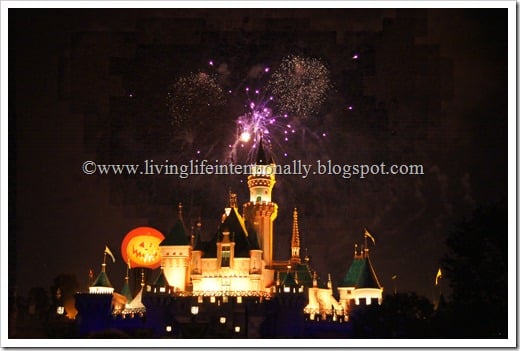 The fireworks were really neat! I am always amazed at how Disney combines elements to create truly amazing shoes!  You will find Jake (apparently from Nightmare before Christmas which we have not seen) being projected as a happy face to the left of the castle. There are lots of great fireworks, flames, and it is all choreographed to music from favorite Disney movies. Again, this is not about the villains or “darker” things.

The best place to see this (and only place to hear the music alongside the fireworks) is directly in front of the castle. In this regard Disneyland needs some major reworking!! Immediately after the 8:30 parade everyone moves to the streets in front of the castle and stands there. This is the “designated” viewing area. Some people are trying to get through – but they won’t make it. You just stand there body to body until the 9:30 fireworks. It is a little bit of mad chaos. But at least it is just 30ish minutes. If you have a stroller I suggest having kids sit in it and using it to “save” their space as adults push in and don’t see kids underfoot. However you will need to lift kids up to see above the taller heads. Still – a great show and a don’t miss in my book. 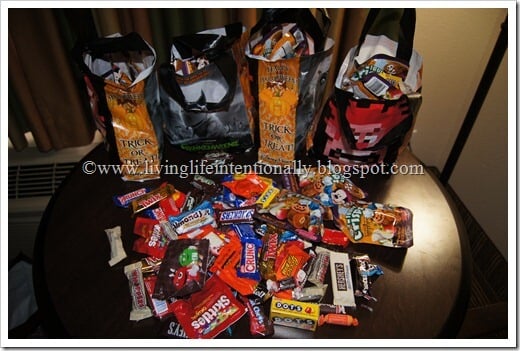 Lots of Candy at the Trick or Treat Trails

There are 8 or so Trick or Treat Trails around the park. They will be labeled on your map and clearly marked/lit. You stand in line and get to go through 2-4 (depending on location) stalls handing out handfuls of candy.  You will get sturdy bags for collecting your candy when you check in for the party. You will definitely fill the bags and get more than your fill of treats! I saw locals who brought their own larger bags, but we felt like we had plenty candy! Plus adults get to collect candy too =-)

What Character to See at Disney’s Halloween Party

I suggest seeing characters for about an hour before standing in line for candy. The lines (especially the main street one) is LONG at the beginning of the event. And who wants to pay for tickets to stand in line to get candy!  The other thing is that each stand has a healthy option too: Craisins, apples, dried apples, raisins, etc. Most lines will give you candy & a healthy treat if you ask =-) These make great snacks for the kids for the following day at Disneyland!! 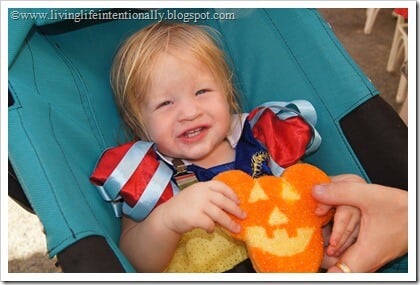 Seeing special characters was the highlight of the event for us! 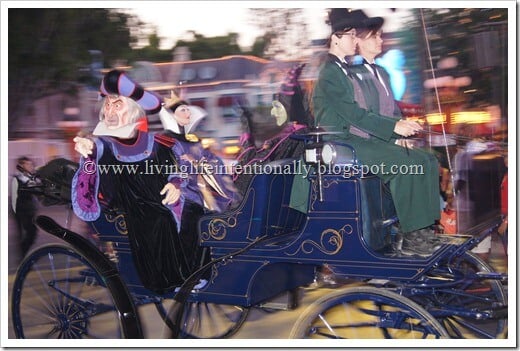 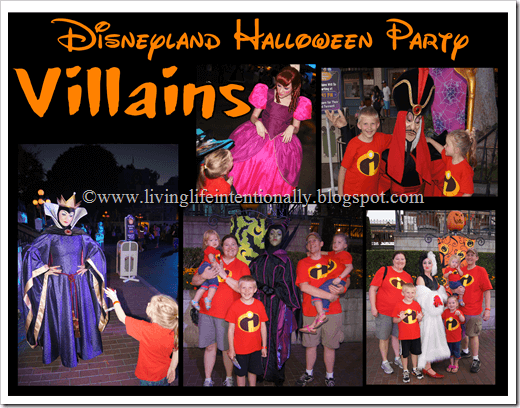 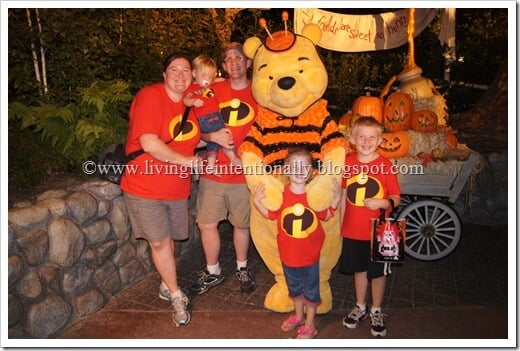 I do want to point out that the Haunted Mansion gets revamped from September-December around the theme of Nightmare Before Christmas. You will not find the traditional music in the mansion. We were disappointed by that. But I guess if you liked the movie or were local and wanted a change you might like it. They go all out decorating! There are lots of colorful Halloween paper wrapped presents, singing Venus fly traps, spooks have on Santa Hats,  Jack himself is in the mansion, and find a special “present” in your doom buggy mirror as you exit! Space Mountain has also been updated for the fall season to “Ghost Galaxy”. Personally I found it obnoxious. They add some loud “noise” and some occasional projects which are hard to make out. It was enough to make my kiddos not want to ride one of their favorite rides…but wasn’t really “cool”, in my opinion, either.

Is Mickey’s Halloween Party Worth the Money? 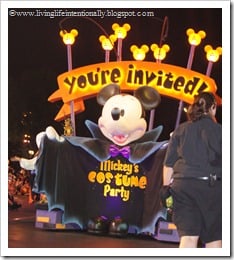 So – did we like it? You bet! When else are you going to get to meet all those Villains, take in a family friendly parade, watch dazzling fireworks, and get such a stash of candy =-) It was a lot of fun, although I don’t know that for the price tag it would be worth doing annually or even biannually. But it was great fun to do once =-)

Mickey’s Halloween Party at Disneyland is a lot of fun. If you want a completely different parade, fireworks, and a chance to see the Seven Dwarfs, don’t miss the Mickey’s Not-So-Scary Halloween party (Disney World)