Winter is upon us and this year as been a little different with our weather. Instead of a big dump of snow, we’ve had weeks of gorgeous frost sugaring the trees and grass. It’s gorgeous, but my kids were a little confused. How did we end up with frost instead of snow? It was time for a little science activity to show them how frost is created! This Creating Frost Science Experimentsis for kindergarten through elementary.

Do your kids love Frozen or maybe they loved Frozone in the Incredibles? The ability to create frost and ice at a single touch sounds like an amazing super power.

Now, we couldn’t make frost in a single touch, but I came up with a simple way to create frost that I thought would make a nice and easy experiment. Boy was I surprised when it failed and turned into a great teaching opportunity. 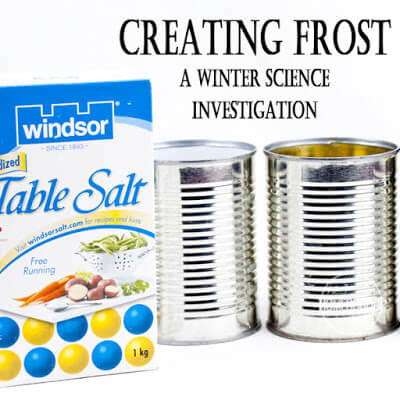 To make your own frost you will need:

The Science Behind Frost and Salt/Ice Reactions


Salt lowers the freezing point of the ice. This causes it to pull heat from the air and tin can, significantly dropping the temperature on the surface of the tin can. Moisture from the air will freeze as it comes in contact with the cold surface of the can, leading to the creation of frost. 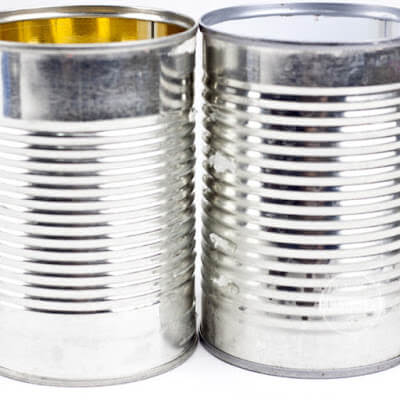 In this experiment we wanted to explore the importance of salt in the frost creation process. To do this we set up a control, plus our experiment.

Our control consisted of a tin can filled with ice but no salt. We filled the other tin can with ice and salt sprinkled over all the ice. Then we sat back and watched.

Very quickly the tin can with the salt and ice mixture started getting colder. Over time the cold became intense and there was a bit of condensation on the tin but it wasn’t turning to frost and was so thin it was almost not there. The tin can was also hard to touch it was so cold, but even 15 minutes later we still had no frost.

We were stumped. The tin can with salt ice was so cold it stuck to my fingers when I went to empty the ice from it. The tin can with no salt was just cool. There was a significant difference in the temperatures, just no frost. 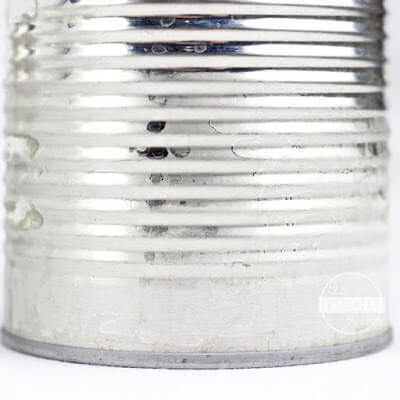 Here is a close up. Just a very thin layer of condensation, but no frost build up or crystallization like we see in the frost outside.

Our experiment was a failure.

Making Adjustments and Learning from Failure

After our first experiment failed to produce frost we discussed what was needed for frost to form. We had the tin cans that would conduct the cold. Having it stick to my fingers was proof of that. But something was missing.

It’s winter here, and winter in our neck of the woods is cold and very, very dry. After explaining this to the kids, I asked if they could think what was missing for our frost to form.

Very quickly they came up with the answer: humidity! Our air is lacking the humidity or moisture in the air that we needed to create frost.

We explored a few different ideas for how to adjust this variable in our experiment. We placed steamy cups of water near the tin cans. We tried adding water to our tin cans. We tried blowing on them. Changing all of those variables failed to produce frost. Then we decided to move the whole experiment to the washroom while someone was having a shower, and it worked! 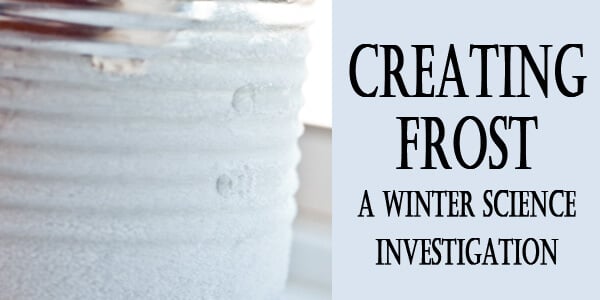 We finally created frost! We had beautiful little crystals and wonderful frost build up on the can.


It took a little experimentation and exploring the science, but going through this process of scientific experimentation made for a learning experience that will stay with my kids for a long time. They not only learned about how frost forms, but learned about our dry climate and why it is so dry in winter.